Five Oddball Things in our Kitchen 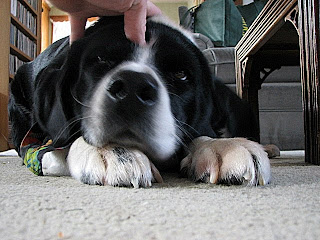 This picture is just tossed in extraneously. It would have been a more soothing photo if the photog's hand were not holding the dog's head down. The animal was unharmed.
* * * * * * * * * * * * * *
I have been derelict in my blog citizenship lately, letting days, if not weeks, slide by. I finally got a sort of "day off" today, when a rather intimidating snow storm hit our part of the world, and I decided to compensate for already having worked over 40 hours this week. Anyhow, in my down time, I noticed that some time last week, my sister put up this post asking people to show off five odd things that can be found in their kitchens.

Well, those who have been in our house know it is a museum of sorts, so this was no big challenge. I give you: the Kitchen Kollection (some of which has been featured in long-ago posts about Weird Objects).

1. THE BIG HAMMER. This inflatable hammer was "won" by this writer in some seminar where they presented the information in the form of a game of "Jeopardy". Somehow I won, and the prize was this hammer. It makes a little squeaky sound when you wallop someone with it. Kind of amusing. 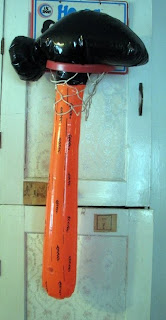 2. MICHAEL JORDAN NERF BALL HOOP. Remove the hammer, and you discover that its holder is another artifact. You can tell this thing is ancient. Not only is Michael in uniform and playing, but he has HAIR in the backboard picture. 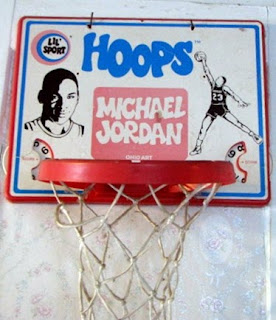 3. FISHER PRICE ACTIVITY CENTER: Ever since our kids were babies, we have had this "busy box" or whatever they call 'em on a closet door, down at cherub's eye level. The kids are all up and out of here, but this thing remains, occasionally used by a visiting toddler. 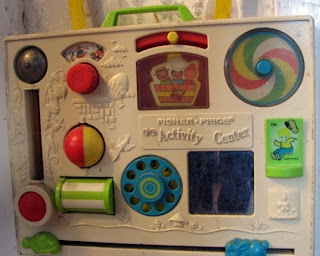 4. WIND-UP TOY COLLECTION: My wife loves wind-up toys, and displays a good bit of her collection in this converted spice rack in the kitchen. 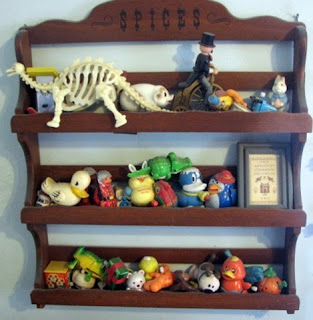 5. COW PIE BINGO RENDERINGS: And finally, this piece takes a little 'splainin'! Once evening, our son and a friend drew these lovely diagrams on post-it notes. Have you ever gone to a county fair or a charity function where they play what is affectionately referred to as "Cow Pie Bingo?" Where they grid off a field with a couple cows, let people bet on a selected square in the grid, and then let nature run its course? That is what these drawings are attempting to portray. Why, I dunno. But I think they may fetch some big money at Sotheby's some day. For now, they "hang" in our kitchen "gallery". 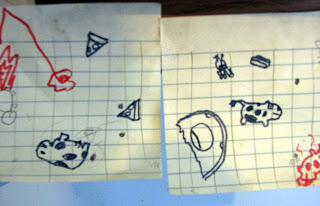 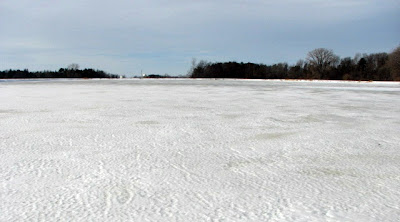 somewhere down in there is our drinking water, chilled to perfection

Cabin fever kicked in a couple weeks ago; it is at full tilt now. The promise of the mercury hitting the upper 30's drove me - and I drove the dog - out to the reservoir, just to be SOMEWHERE. The scene was still pretty desolate, but there is a promise that this white stuff has limited time left in frozen form. And the dog had a good time. 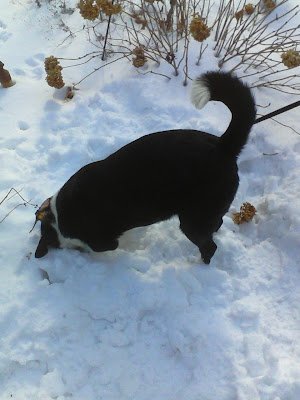 This is one of Ollie's favorite activities - sticking his snout (or whole head if he can manage it) into the snow. Then he likes to propel himself forward by kicking with his hind feet. I am not sure exactly what the big rush is for him, but he seems to work one or two major face plants into every walk when there is snow available.

We didn't see any critters along the walk, but we saw evidence of them... 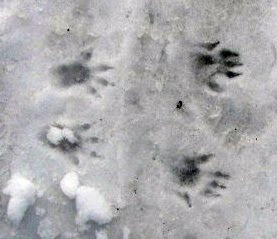 And actually, we did see the big guy who left these. And his rider... 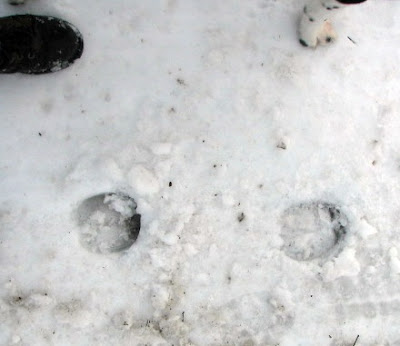 Stopped at the stand of pines in the next picture, and listened for a while as the wind whistled through them. That is one of my favorite sounds in the world. 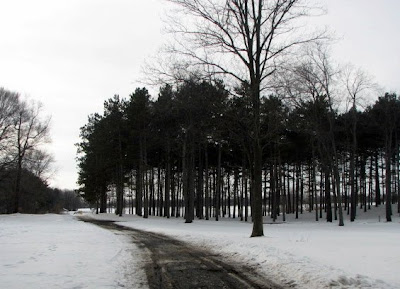 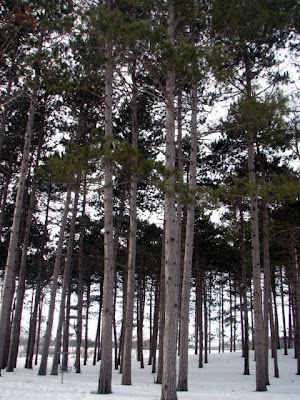 Today's other highlight was "acoustic Sunday" at the early service. Five of us busted out the acoustic guitars and strummed some of the classics, like Kum By Yah. It was a lot of fun, but I suppose I will be back to toting in the heavy keyboard next week. I think there are only so many songs with my limited range of chords in 'em. But I did also work in am 18-note solo on this bad boy, the recorder from my youth... 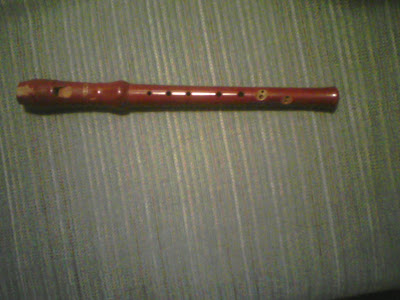 A Tail to Warm a Heart on a Cold Night? 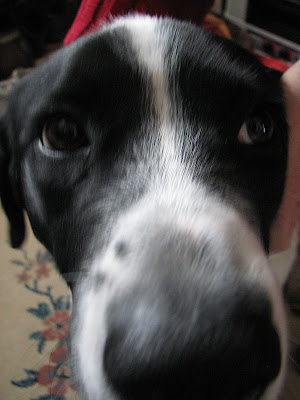 I was down in Columbus last night. I had just finished the creme brulee, following an amazing entree of salmon with asparagus and potatoes, and enjoying the company of my fellow staffers at our annual dinner meeting. The cell phone buzzed and it was my wife. She just had a short story for me (mind you, we had chatted for quite some time a couple hours prior).

It seems a neighbor down around the corner, a 97-year old woman we know from church, had answered "yes" when Linda asked if she would like a visit on a night when there was no doubt that she was not venturing anywhere. She added to that affirmation: "and please bring your dog".

So Linda leashed up the lab and they headed over. Once inside, Ollie pretty much immediately walked over beside the octogenarian's chair and sat. She reached over and scratched him on the back. My understanding is that, for the remainder of the visit, perhaps half an hour, Mrs. Limmerman continued to scratch Ollie on the back, and he sat lower and lower, finally just lying on the floor right next to her.

When it was time to go, Ollie got up, and off he went with Linda.

I know it's a silly little scenario with no plot and no action, but the image of the elderly woman, so content to simply scratch a visiting dog while he just sat there (and the dog, definitely content to hang around and be the scratch-ee), stayed with me for the rest of my time in Columbus. In fact, I returned to my table mates and told them about it - and received a chorus of "aawwwww's".

I'm guessing that we will return to Mrs. Limmerman's house, all three of us, one day pretty soon.
Posted by Ben at 7:47 PM 3 comments: