It was meant for Squirrels 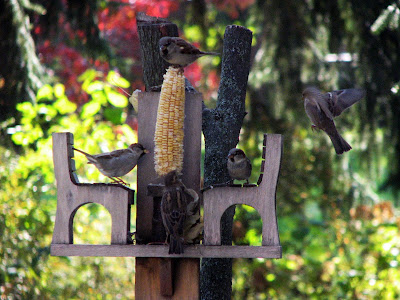 We had an Occupy Squirrel Feeder movement going on in the back yard this morning. I guess the birds figure they are the other 99 percent. So I say, "have at it!"
Posted by Ben at 3:50 PM 5 comments: 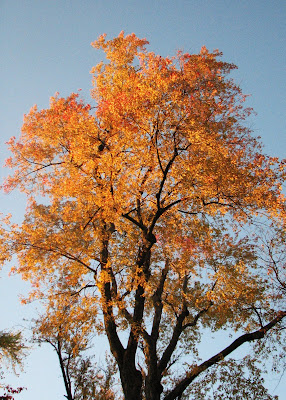 About ten miles from home tonight, the ol' Impala's odometer hit 100,000 miles. Funny; I still think of it as the "new car". And it is not that old; I probably put upwards of 30K on it every year.

The most recent repair was a minor one, but a small victory nonetheless. It needed a new low beam headlamp. I decided this was low enough on the mechanic aptitude scale that I could take on the challenge myself. Bought the bulb and got out the manual. Made the requisite three to five trips into the house to get the right tools (I overthought it, bringing out the entire socket set, two Phillips screwdrivers and three or four "regulars"). The project went quite well, as projects go, and I got the new lamp in the socket and put the assembly back in place with no spare parts sitting around.

Which was a good thing, as I was driving in the wet darkness this morning on my way to run a 7:30 meeting about 45 minutes from home. The meeting went well, but I had hoped to take some pictures around that town after the meeting, to embellish a report I am writing for them, and, let's just say this morning would have gotten the Carpenters down, if you know their oeuvre.

Of course, I got back to the office and the sun popped out and stayed out for the rest of the day. It was so nice that when I pulled in the driveway tonight, I aimed the camera up at the old maple out by the street and she was lookin' good. I believe peak color has pretty much peaked, though, so I had better get back and get those pictures if I don't want things to look too bleak.

I am also perturbed by the conflicting weather forecasts I have been hearing. Yesterday, it was all "It's going to be 70 degrees by the end of the week". Now, today, they are invoking the "S" word. How does the weather forecast drop by 40 degrees that quickly?

On the other hand, I always get a laugh out of all of our reactions around here when we hear about s--- in the forecast. We are so astonished that such a forecast could possibly be bestowed upon us here in, oh yeah, Northern Ohio, near Lake Erie, which also borders, oh yeah, CANADA. Let's face it, this time of year, s--- happens. But for now, before all these leaves are knocked senseless and left to drift onto our lawns, to be raked or blown into piles and sent off to muncipal compost piles, let's enjoy what color is left.
Posted by Ben at 8:27 PM 2 comments:

On the Cusp of Recovery...Maybe?

My work has recently taken me down to the Ohio Valley in eastern Ohio. It is a different world from my comfort zone of the flat farmlands of northwest Ohio. For decades, the lure of the moving water and underground resources brought coal mining, steelmaking, and energy production to the once tranquil valley. In recent years, much of the industry that operated on such a grand scale has been downsized - scaled way back, leaving hulking, vacant monstrosities of buildings and countless Brownfields where thousands used to hold down grueling but relatively well-paying jobs.

So it was surprising to tune into the ABC news a couple nights ago and watch a piece on "Steubenville: Boomtown". I've gotten to know a few folks in Steubenville, and they are not expecting a miraculous turnaround anytime soon. What they do expect is a large number of temporary jobs, followed by a long period with modest gains over today's job scene. And they'll take it.

The catalyst? All that natural gas lurking underground, in amongst what they call the Marcellus and Utica shale formations. They have to inject high pressure fluids and chemicals down there to fracture the rocks and drive the gas out. They call it "fracking". It is somewhat controversial, and the industry types and environmentalists have been duking it out in New York and Pennsylvania for some time. Now Ohio's turn has come, and with a little trepidation, the Ohio Valley is excited to see the "next best thing".

Panacea for the Valley? Nah. Good jobs for a decent number of people? Yup. Drilling rights and steady income for landowners? Could be. More wealth to be spent in the Valley, at the corner deli, local restaurant, car dealer? Definitely. So, though I hug the occasional tree, I cannot scoff at this as a shot in the arm, not to mention the rock, of the region.

I was down in the area yesterday. I have visited twice during our usually-gorgeous Fall Foliage Season. Both days have been gloomy though, with too much pouring down rain. Despite the gloom, here are a handful of pictures from my day in the Valley.

Massive power plants coexist with the river valley, all along the Ohio border
from Pittsburgh to Cincinnati. 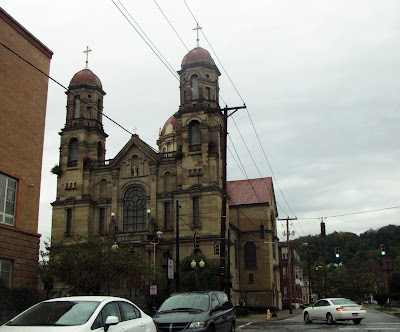 A pretty impressive church in Steubenville, from back in the day when they built 'em to impress man and God. 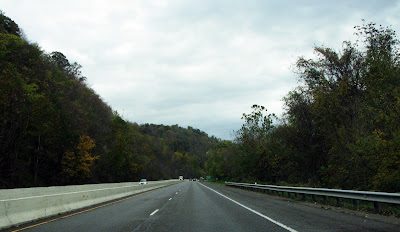 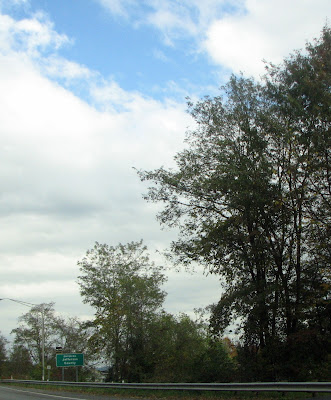 I just wanted to document that I got to see some blue sky. Actually, this was just about it for the whole day, just as i was crossing the border into Jefferson County (where I was headed; note the welcoming sign). A good omen? 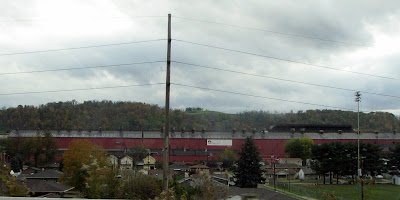 Driving along 7, sometimes I just pointed the camera out a side window and snapped a random shot. I like this one, with the houses dwarfed by the huge plant behind them. The size of so many installations along the river is amazingly immense. 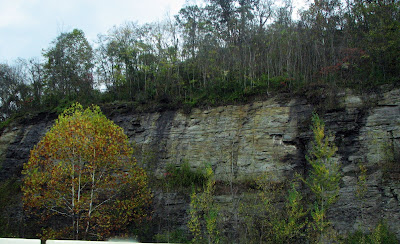 And last, despite civilization's incursion into the Valley, not to mention cutting big pathways into the rock to route the traffic, there is plenty of beauty to be found.
Posted by Ben at 10:07 PM 2 comments:

fall, that fleeting blur of color on the way to something else 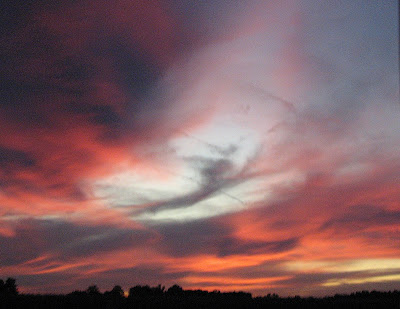 If autumn would hang around and just be like it was this past weekend, all would be well. But we know what follows, which makes it all the more precious, and we watch the leaves fall like sand in the hourglass (sounds like an old soap, dunnit?). It's not "peak color" around here yet, but it is getting close. We had a chance to get out in the weather and the leaves on Saturday. Then on Sunday we drove down to Columbus to see (a) an old college friend; (b) our son, hanging out with us at a coffee shop; (c) a friend who had some furniture she wanted to part with, and which our daughter could use; and (d) Linda's mom, on the way home. Pretty good, jam-packed itenerary. The sunset on the way home as we traveled up Route 23 was spectacular; the camera only caught a portion of the entire show. 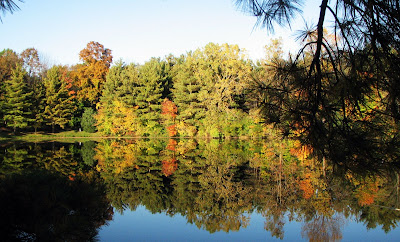 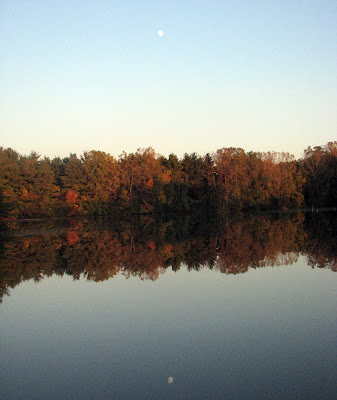 Before we took in all this autumnal beauty, Linda did her annual gig giving away books at a "fall fun fair" put on by our County Soil and Water Conservation Service. The book give-away was courtesy of a thing called "First Book", which strives to put books into the hands of kids, many of whom I suspect may not have any otherwise. A sad comment, but I would bank on it being true in many cases. 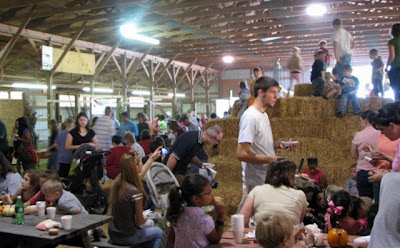 Oh, and there was a petting zoo. With a llama. And a horse-drawn wagon side. 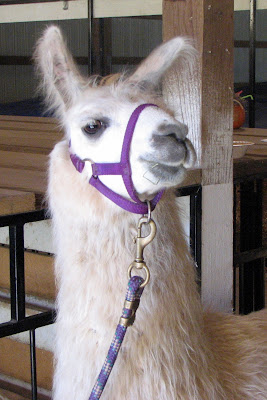 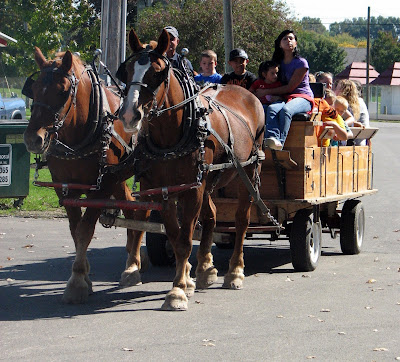