A-Z Munchin' Monday: NUTS TO YOU!

This week, for our Monday Food Focus, we're going to celebrate all things nutty. Consider the lowly nut. We call crazy people "nuts". Not much respect for the actual nut, is it?

I'm a pretty big fan of nuts. We usually have a couple varieties around, and I am likely to toss 'em in a jar or can with some raisins, and mix them up as a snack.

We had some pistachios around a couple weeks ago and you could just hear the clatter from the pistachio shells hitting the wastebasket (or in some unfortunate cases, the floor). And isn't it fun to go out to one of them country road house steak joints that stick a big ol' bucket o'goobers out there for you to shuck and eat, and just toss the shells all over the floor? is that living or what?

One memorable nut experience we had was gathering those big ol' sloppy walnuts you can find under some apathetic neighbor's tree, bringing them home to our apartment (this was some time ago), setting them out strategically in the driveway, and running the Vega (I said this was some time ago) back and forth over them until they were adequately "shelled" (or is it "de-shelled"? or just plain "road killed"?)

I have a sweet tooth for those peanuts you can buy that are toffee coated, or honey roasted. But I also like them plain with the aforementioned raisins. Cashews, pecans, almonds - pretty much all good.

I leave you with a quote from one of my favorite, largely improvised movies, "Best in Show", about a dog show actually, but there was this character taking his dog to the show, who took great pride in his knowledge of nuts. As he explained to the cameraman:

"I used to be able to name every nut that there was. And it used to drive my mother crazy, because she used to say, "Harlan Pepper, if you don't stop naming nuts," and the joke was that we lived in Pine Nut, and I think that's what put it in my mind at that point. So she would hear me in the other room, and she'd just start yelling. I'd say, "Peanut. Hazelnut. Cashew nut. Macadamia nut." That was the one that would send her into going crazy. She'd say, "Would you stop naming nuts!" And Hubert used to be able to make the sound, he couldn't talk, but he'd go "rrrawr rrawr" and that sounded like Macadamia nut. Pine nut, which is a nut, but it's also the name of a town. Pistachio nut. Red pistachio nut. Natural, all natural white pistachio nut."

I'm gonna likely be off-grid for a while, so here is my M post well in advance of Monday.

My M entry is: Moo goo gai pan. This mild chicken dish was my initiation to CHinese Food, The family used to travel down into downtown Baltimore to Jimmy Wu's (long since gone) for a Chinese meal. I got to really enjoy the Moo Goo with its creamy sauce and chicken and vegetables like bamboo shoots and those crunchy discs that I am having a total mental relapse over here. Um...water chestnuts. So says my wife who knows these things. And a piping hot bowl of egg drop soup.

Eventually I adopted a preference for more spicy Hunan or Szechuan treats. Just this week I had "two delicacies" for lunch one day - chicken and shrimp. It was with people from work. For some reason we didn't play the little racy game we usually play with the fortune cookies. Too bad - I had a funny one.

Perhaps the best Chinese meal I ever had was at a place called House of Hunan wight on Michigan Ave. in Chicago. I believe it was "empress chicken". Something like that. Man, it was good! The guys I was with had something that made their foreheads sweat profusely. They loved it! The empress chicken was not that extreme.

I like to get the chopsticks for a Chinese meal. I am not super excellent at manipulating the sticks, but I get by, and it slows me down, which is a good thing, as Linda will tell you I eat too quickly. I knew a guy once who got out a knife and whittled points on his chopsticks so he could stab at the food. Probably more effective.

Still like a big dish of Chinese food. I could go for one right now. And then again two hours from now, so they say.
Posted by Ben at 10:09 PM 8 comments:

Well, for me, there is one obvious food that begins with an L, and that food looks like this:

We are talking lasagna here. As those who have been following this series will recall, I have had a life-long love affair with the hamburger. Sooner or later, somewhere in my youth, I discovered that this chopped sirloin or what have you could be combined with other ingredients and made into other wonderful dishes, especially involving cheese, tomato, and pasta. This was proven to me initially be my mother's spaghetti, and also by my grandmother's cheesy spaghetti in a bowl.

I married a woman who would occasionally produce lasagna and this was a good thing. She also would take ground beef and fashion it into a spicy but wondrous Indian dish called kema (?) curry, but that does not begin with an L, so we shall leave it there. Should've covered it last week.

Went to a wedding in Baltimore this year, and the mother of the bride made lasagna for everyone at the reception. This was an insane quantity of the real deal (she's quite Italian); in fact I've heard her lasagna has since won some city-wide, radio sponsored lasagna contest, so I've had some good lasagna this year.

I have rarely, if ever, had bad lasagna; often it is authentically made with sausage rather than just beef, but it's (almost) all good. There's even meatless lasagna out there that is delicious.
- - - - - - - - - -
Because of a recent event we attended, I have to give an A-Z shout out to LEBANESE food. We were at a luncheon featuring a delegation of young entrepreneurs from Lebanon, Jordan, and the United Arab Emirates. The food was mainly Lebanese; they started things with some pita bread and plunked down huge bowls of hummus that looked like this:

Main course was chicken and fish with various spices that I do not recall. Olives, figs, dates, dried fruit on kabob sticks. A great feast, and the program was also memorable. The variety of food traditions and indigenous dishes makes this an interesting planet, indeed!
Posted by Ben at 9:07 PM 10 comments: 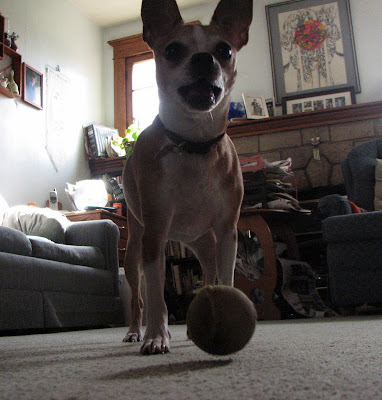 Stretching it a bit to fit this week's letter, but I just didn't have that much to say about ketchup, and I was coming up short. So I am talking about my kids and, in this case, our son William, who hasn't eaten any meat since lent began, and who solved the problem of what to serve on Saturday when we all got together this weekend by cooking up a big ol' eggplant dish that, as it turns out, was delicious. 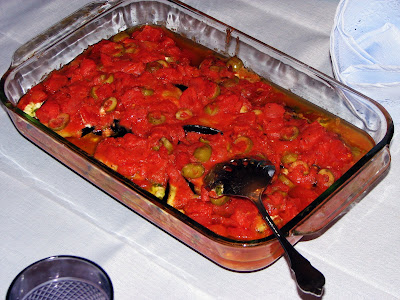 I have no idea what the amounts of each ingredient were, but I know he served it up with rice and included the following wonderful ingredients: eggplants, sliced flat and wrapped around feta cheese; cilantro leaves, olives, diced tomato and sauce. I am probably missing something, although it was fairly simple. But deelish. I knew our daughter knew her way around a kitchen, but who knew the lad would become such a chef? 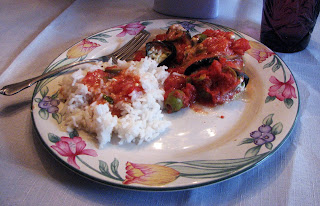 Today he got back into the meat thing and we had a ham and potato casserole prepared by our "house chef". Also great eatin'.

I hope your Easter weekend has been a good one. Our Easter began with a sunrise service presented by the youth of our church, out at the reservoir, carefully located with the water to the east. The service was simple but profound, with the speakers competing with the ducks and geese and other assorted fowl. Now the kids have gone back home and the nest is again an empty one, aside from the dog, who is fairly well winded from a weekend with the "grand dogs".
Posted by Ben at 7:03 PM 7 comments: