Just a few shots of the flowers appearing in our yard over the last month. 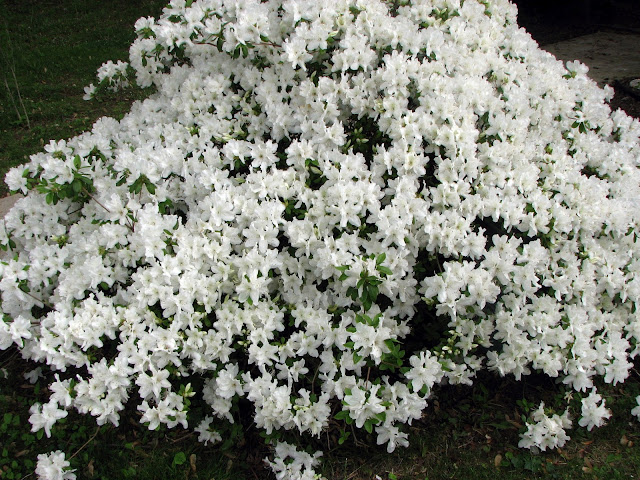 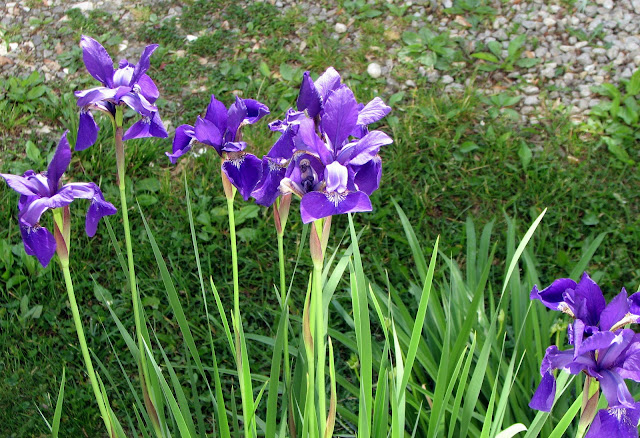 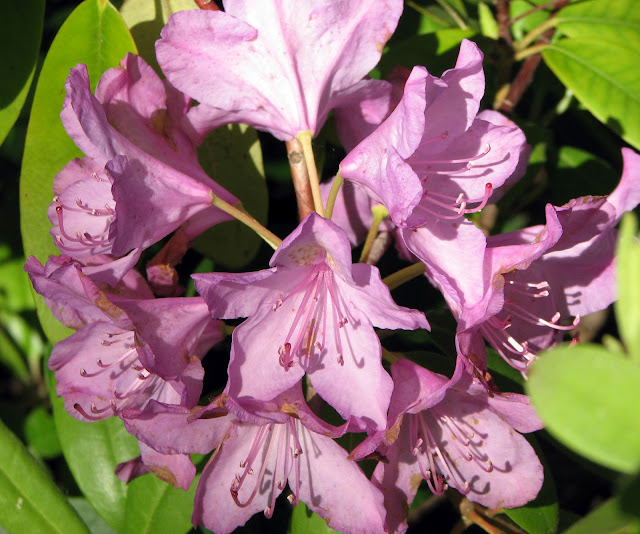 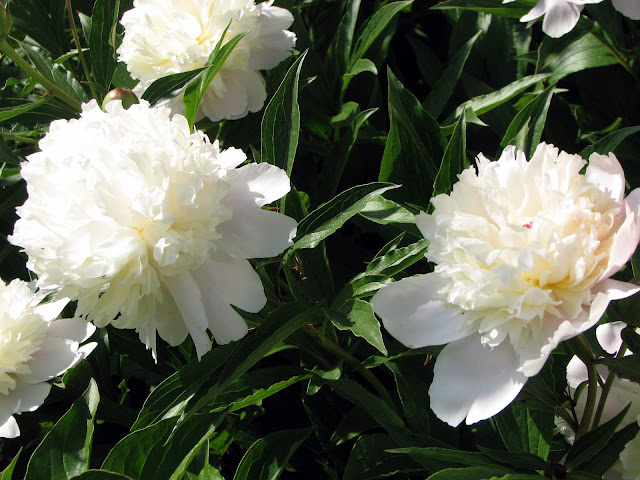 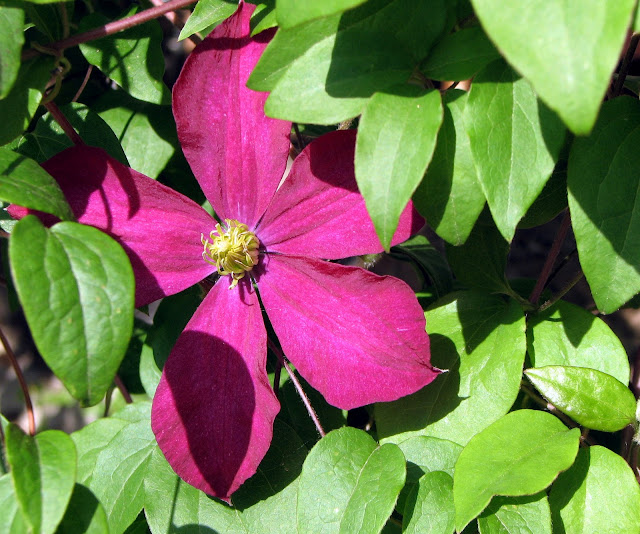 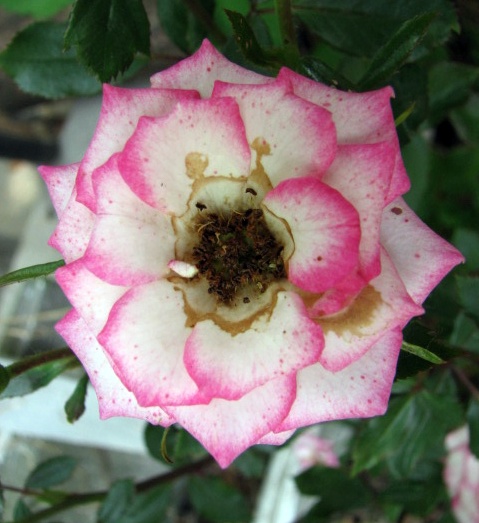 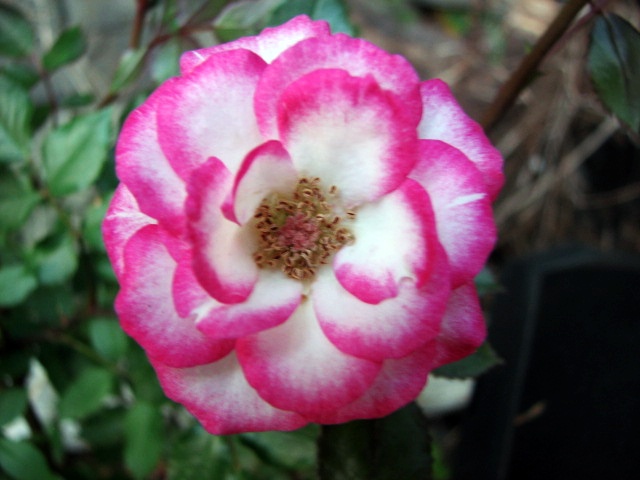 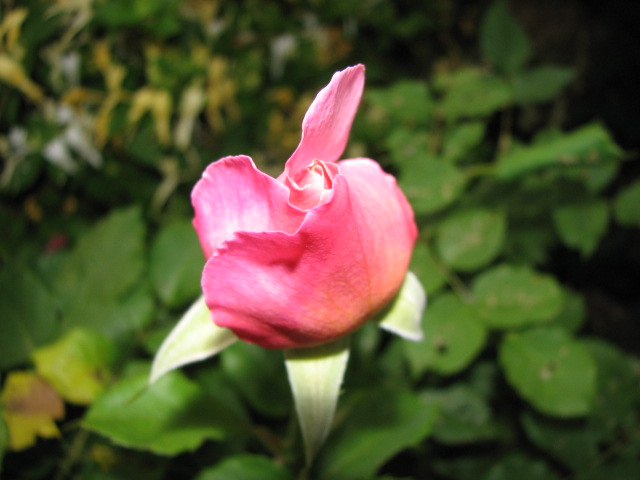 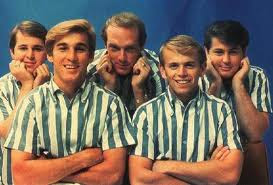 The Beach Boys - Then

I think the Beach Boys have been around about as long as I have seriously listened to music.  Back in the '60s they were the ultimate carefree car and surf summer tune generator.  The hits just kept coming.  Then they started getting a bit more experimental.  For me, that's when it got interesting.  I thought their best work appeared around the time of the album, "Surf's Up".  Most of the world thought the pinnacle was reached when they released "Pet Sounds".  That's the one that the Beatles heard and knew they had to kick things up a notch to "compete", resulting in the sea change that was Sgt. Pepper. 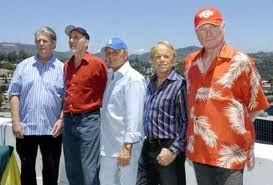 Pet Sounds was great stuff.  Instrumentation was, to a degree, unconventional, straying from most bands' guitar/bass/drums.  And Sloop John B is a personal favorite.  This was followed by the incomparable "Good Vibrations", the song that brought the eerie sound of the theramin to the pop world. 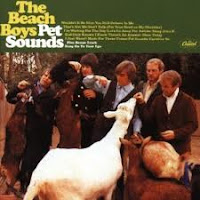 One fascinating legend from way back when was the recording and subsequent non-release of the magnum opus known as "Smile".  Brian Wilson was still at his creative peak, before his well-noted meltdown and retreat to the grand piano in the sandbox in his living room.  "Smile" was creative and unconventional, melding songs and snippets and ideas together, with obscure lyrics offered up by Van Dyke Parks, but with the unmistakable signature sound of Mr. Brian Wilson. 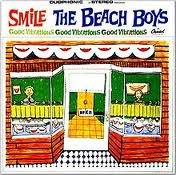 A Brian Wilson version of Smile was released a few years ago and it carried the Beach Boy tradition forward with class.  Finally, in the past year, the original Beach Boys version was released in a huge box set.  I have the Brian Wilson version but have not yet heard the new release.  However, bits and pieces of Smile have existed for decades on record, with tracks appearing in an album called "Smiley Smile" and on the title track of "Surf's Up", and elsewhere.  But this recent release finally put it all together as intended.

This year marks fifty years of the Beach Boys.  The surviving original (and nearly original) members are reuniting for a limited-engagement tour.  There is a single release out there, and an album of new Brian-penned material will be in stores soon.

I count myself a fan; I have been a fan since Daddy Took the T-Bird Away.  The nostalgic part of me is pretty stoked that the Boys are back and even adding to the oeuvre, as it were.  The band is one of those American musical treasures, and in an era where pop and rock icons from my past are departing this world with unsettling frequency, it's great to have these guys back together, even if this proves to be a last hurrah.
Posted by Ben at 7:51 PM 3 comments:

I remember having to attempt to read that well-known French work, Le Petit Prince, by a dude named Antoine De Saint-exupery, in French class (which was known to me as "the bane of my high school academic existence").  Anyhow, the book is full of illustrations of this kid on this small planet.  So small that you could see about 270 degrees of its curvature, if not all of it, in most of the illustrations.  Ridiculous.  I mean, how does such a small planet produce enough gravity to keep even a petit prince from floating away?

So anyway, I was driving home from some meetings for work and came across this small hill with cows on it.  The curvature of the hill was ample enough to remind me of that absurdly small planet in that French book.  I was able to snap off one picture as I sped by.  So, here is the cow prince and his friends on their cow planet. 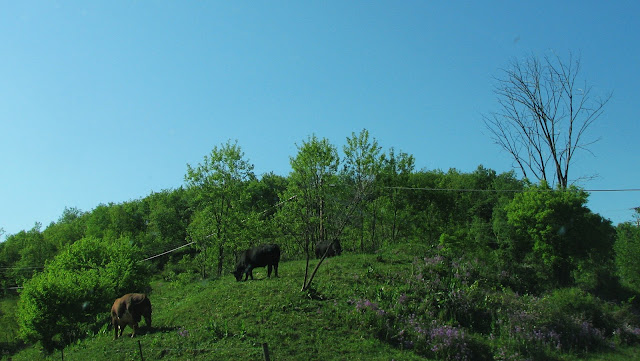 I will add this "bonus" picture.  Farther down the road, between Urichsville and New Philadelphia for all of you with Ohio maps handy, is what appears to be this cement doggy out in someone's yard facing the traffic on US 250.  I'm just wondering, "why the doggy?"  I mean, I like it.  Quite a bit.  That tongue hanging out was a great touch.  But I just wonder about who made this decision that they really wanted to have this cement doggy out there in the yard. 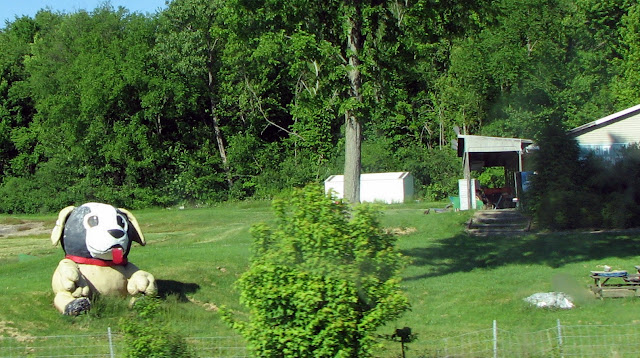 BACK TO THE BLOG

I will not let a month go by without posting SOMETHING on this blog.  This is one day - three hours, actually, shy of a month.  I suppose I can say "I've been busy.  No time for such frivolity."  Partially true - it HAS been a busy month.  For example, I have to get up and drive 150 miles tomorrow to a series of meetings in a land far away.  A land where my long-held hotel reservation got "bumped by the White House" because V.P. Joe Biden is visiting the area and they have some sort of right to go and reserve a slew of rooms and kick us commoners to the curb.  They wanted to send me 20 miles up the river.  I said nyet to that and we found an accommodating place just six miles away.  Now I fear I will be dodging motorcades and all that.  And avoiding that original hotel like the plague.  You know what them Secret Service boys attract to such places!  Ain't getting caught up in that! 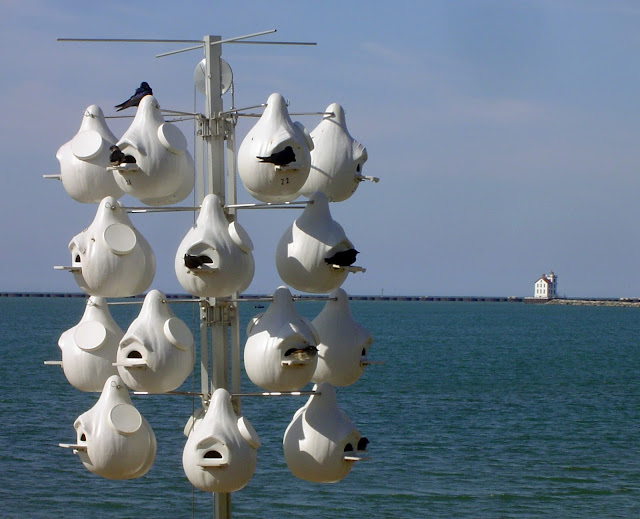 Okay; two pictures.  The first being an interesting bird multi-unit dwelling alongside the lakefront park in Lorain, Ohio.  Kind of a cool thing, and it looks like it is rented up.  The Lorain lighthouse can be seen in the distance. 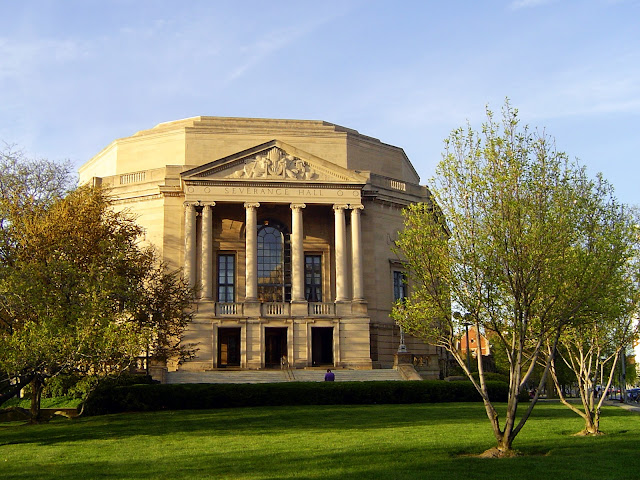 The second being the facade of Severance Hall, where about a month ago, my wife, a friend, and I took in a concert - the Cleveland Music Institute or such, and a huge choir, doing Mahler's Symphony No. 2, which is quite a ride.  It was excellent, and the accommodations were exquisite.  Severance is a wonderful venue, with the largest, deepest stage around.

And a shout out to the Q'doba (did I get that right?) about a block and a half away right on Euclid.  The staff there were the most empathetic, people-oriented, caring staff I have ever encountered in such a place.  Absolutely astounding service and humanity to go with those pretty good super-filled burrito things.

OK - I hope to appear here more frequently; pick up the pace a bit.  To be honest, this blog is searching for some sort of uniform voice, some theme, some thread that can carry it.  I am all over the place.  I could easily do music reviews, but that is a bit too nich-y (as opposed to Friedrich Wilhelm Nietzsche, the  German philosopher, poet, composer and classical philologist.)  Although, yeah, I want to come across here as a philosopher, poet, composer, and, yes, by all means, a phililogist.  Are they legal?  Hang on...

Ok, it turns out that philology is the study of language in written historical sources; it is a combination of literary studies, history and linguistics. Honestly, I really don't want to do that.  But the other items, sure.  And I take a few pictures along the way, as well.

Anyhow, this whole post has been what my college roommate, who took a psych class or two (actually, I did too - and he was in the class.  It was not a very good class, but the subject intrigues me), referred to, correctly, as "displacement activity".  I need to be doing something else right now, but this is less taxing, more fun.  So I am avoiding some homework-like stuff.  I guess I do have this long drive tomorrow, so I shall get on that assignment and call it a post for now.


Until next time, here is a pretty nice shot of the State Capitol building and other architecture down in Columbus, Ohio. 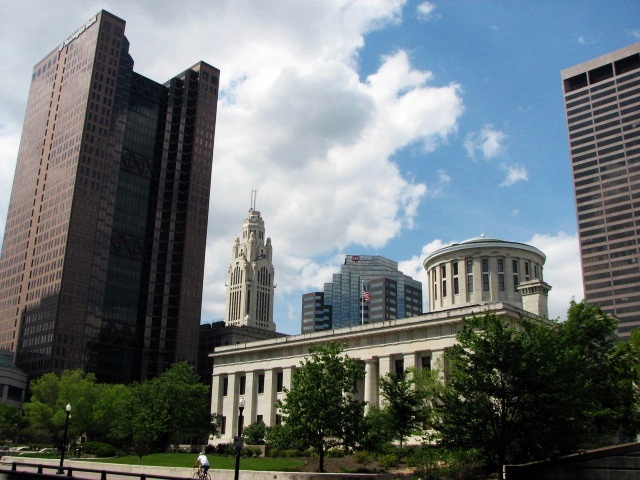