Wow. The east coast is taking intermission between the 5.9 temblor and the imminent Irene. Back here in the "peaceful" midwest, we had our own fun with a little event I like to call midnight tree topping. It seems a cool front packed a 70 mph wind burst punch and took out trees all over the west end of one town near here. In fact, we got to awaken around 1:30 to two ominous things: blinking lights from police cars and the sound of a chain saw. It seems a good portion of a neighbor's tree crashed down on the street and stopped traffic. The good news is there is basically NO TRAFFIC on our street at 1:30 a.m.

Anyhow, between that and the roller coaster ride our economy is taking, and the seesaw ride our national politics is taking, and all the rest of the drama and uncertainty, as a public service to you, the reader (and at this point, this blog may just be speaking to you, yeah, YOU, as "the reader"), we bring you some photos taken a handful of weeks back when, while on vacation, we again visited the African Wildlife Safari. Longtime readers of this site will recall previous such photo collections. Those who know their animals will wonder why the place is billed exclusively as "African".

Anyhow, here they are, providing you with some escape from the worries of the day. 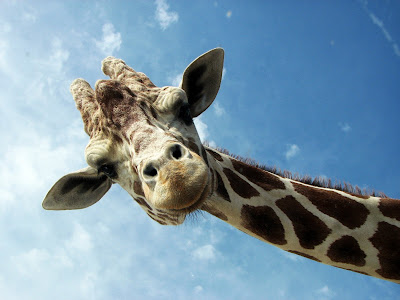 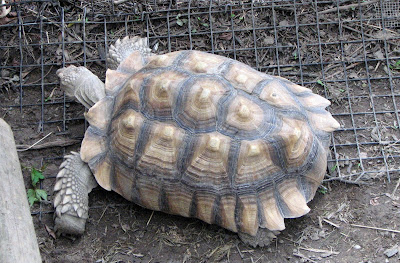 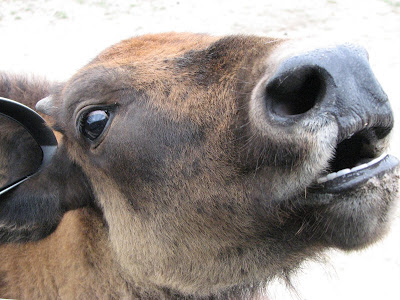 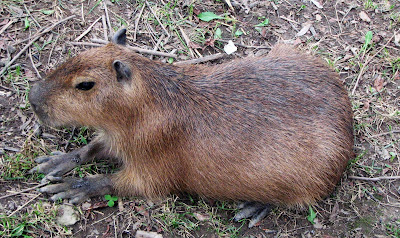 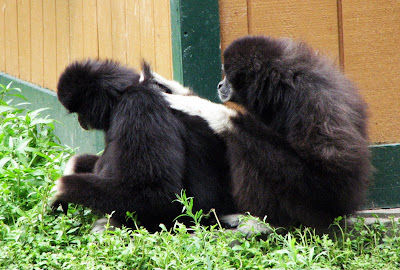 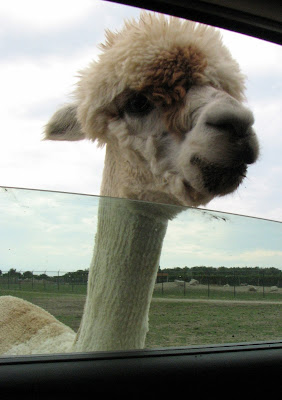 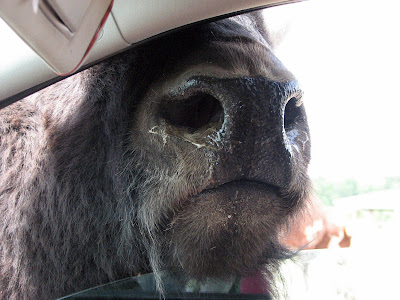 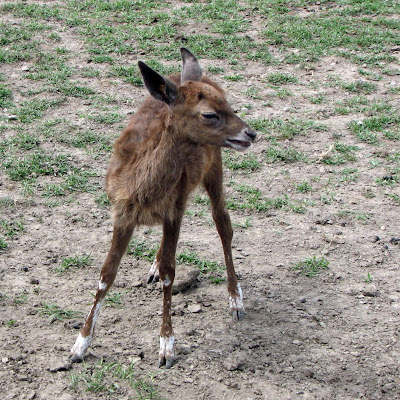 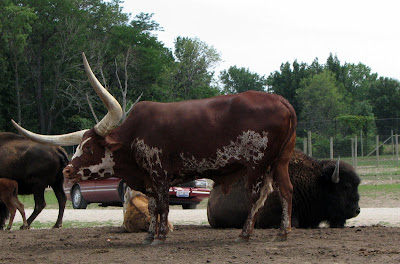 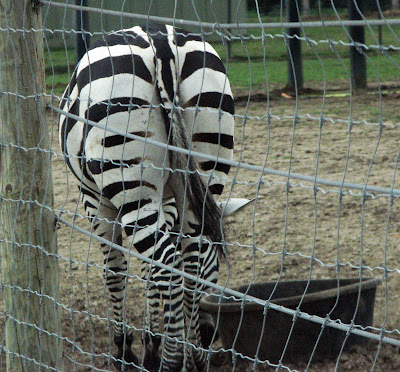 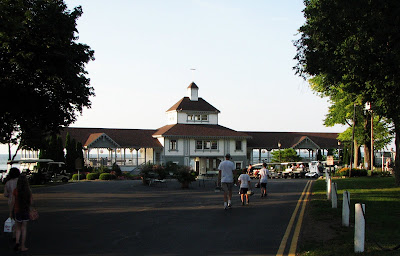 There's probably some neat name for this pavilion.
I don't know it, but I like the thing.

Still trying to keep the vacation vibe going, we escaped to nearby (45 minutes) Lakeside last evening. We had gotten some tickets to a concert up there, and took advantage of the opportunity.

Lakeside is this self-contained community, full of cottages and happy families. It is a "Chautauqua" community, based on the adult education, culture, and spiritual blend of the daddy of them all, Lake Chautauqua, NY. So, in other words, there is stuff going on all the time.

Last night was this performance by the Lakeside Orchestra, which a friend informs me is actually a decent group - lots of summering musicians from the likes of the Columbus and Cleveland Symphonies. So they know their scales. 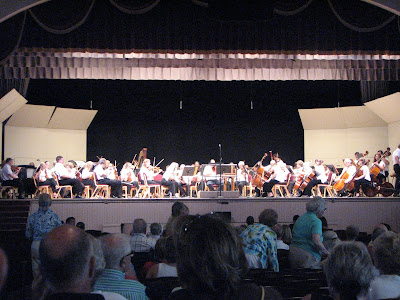 The Lakeside Orchestra takes the stage.
It was a relatively light, "pops" type show - a history of Broadway tunes and such. But the music director - conductor tossed in a lot of history and made it interesting. It was a good show.

Just being in Lakeside for a while is quite entertaining. There are blocks and blocks of well-kept cottages. A central business district where we ate dinner on a patio. The historic Hotel Lakeside. I believe the rooms still do not have televisions - bravo to that, as it seems true to the spirit of the place. And then the waterfront. 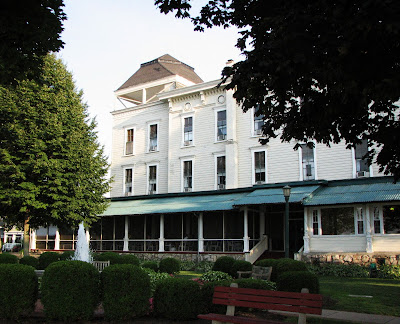 The historic Hotel Lakeside. Or is it Lakeside Hotel?
There is a slow pace at Lakeside. I believe I could pass a whole summer there, reading books, hitting the various lectures and movies and concerts, meeting some people and maybe challenging them to a game of shuffleboard (a big hit at Lakeside - which tells you something about priorities and, to an extent, demographics - although there were a lot of young families on the streets.) Even pretending I was on set for an episode of the old Patrick McGoohan series, one of my favorites ever, "The Prisoner". (You'd have to know the show to get the connection.) 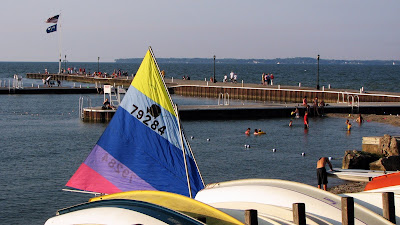 Out on the pier, enjoying a warm Friday evening.
There was a sort of funny out-of-context moment for me as I looked around at the greying crowd settling in for the concert, then noted that the very next night, the featured act was the band, "Starship", which you may know evolved from its interplanetary origins back in the 60's as Jefferson Airplane. Now, none of the original Airplane members are still on board the starship. Grace Slick, Jack Cassidy, Paul Kantner, Jorma Kaukonen, and various vintage others have all moved on. And under the new ownership, the Starship is more prone to love ballads and such, as opposed to preaching revolution and alluding to Alice in Wonderland psychedelia. But at first, the concept amused me. Then it dawned on me that many of these "senior citizens" surrounding me were likely in their 20's and 30's when the Airplane took off, and could probably recite some Airplane hits. Hmm.

All in all, a wonderful escape for a Friday evening, and a third chance within a one-week span to enjoy one of the Great Lakes. 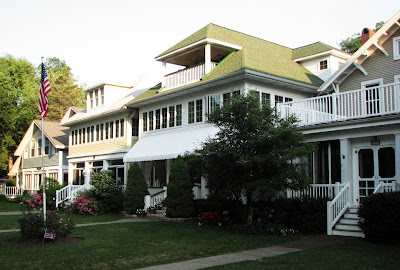 Well-kept properties in the high-rent district (good view of the lake, park, etc.) 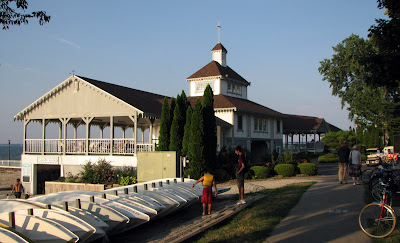 If I were around for another day, I'd have one of those boats out on the water.
Posted by Ben at 3:01 PM 1 comment:

A Week at the Beach

A week away in mid-summer does good things for your mind and soul. Our family is not known for just going somewhere for a whole week and staying put. Our vacations are typically more like that of Bedouins - on the move, pulling up the proverbial tent pegs every morning and moving on to the next encampment (or actually, hotel or lodge. We are not much for actual camping.)

So this was an oddity - a cottage surrounded pretty much by water. The water was not of a super- exotic sort, being Lake Erie, but it was warm and wet and just fine. Where we stayed, we could open a window and just listen to the gentle waves lapping at the shore. I love that sound. I need a tape loop that endlessly makes that sound. Actually, somewhere, I have some electric device that makes "nature sounds" at the push of a button - babbling brook, waves and seagulls, and so on. But it is not the same as the real deal, with the random seagull squawk tossed in intermittently.

The kids were able to join us for a couple days and I am not sure if there is anything finer for the "empty nester" than a period of time when the old family unit (plus son in law - in the new, expanded family unit) is back together, having fun.

I took a few hundred pictures last week, and will only bore anyone coming across this post with a choice few. But the highlight of the whole week, for me, was a simple little activity. Ever since our daughter saw the movie, Tangled, she was enthralled with the music and the scene where hundreds of sky lanterns are released to the sky. Linda got her one of those lanterns for her birthday, and on the last night where everyone was together, we released the lantern. I had approached the thing with trepidation, envisioning the lantern setting down in some super-dry corn field and setting the thing ablaze.

Despite my misgivings, our son, William, lit the fuel pack on the bottom after several matches were blown out in the beach breeze. We all huddled together against the breeze to help with the ignition, and finally it was lit. Then the "kids" held the inflatable bag vertically to fill with hot air. It slowly and partially filled, and our son coaxed it down onto the beach, then up and over the jetty, and finally it made its way up into the atmosphere. My fears were allayed as the lantern soared up over the water in an odd, northwesterly direction, toward Michigan. Meanwhile, our son in law played the Tangled theme song on his iPod to complete the experience. It was quite a scene as we stood there, awed as the sky lantern climbed toward the heavens. I cannot explain it, but those five or six minutes were powerful for me, and not necessarily due to any Disney tie-ins. Just one of those Dad moments, if there are such things?

The other hugely impressive feature for me was the nightly show the sun and clouds put on as the sun set over some far-away trees on a distant shore. I try to limit the use of the word "awesome", but I am busting it out big time in this case - The sunsets were AWESOME.

Anyhow, without any further ado... 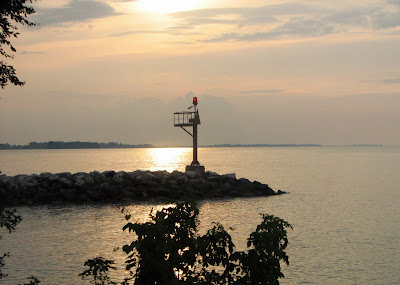 Sun setting on the first night. 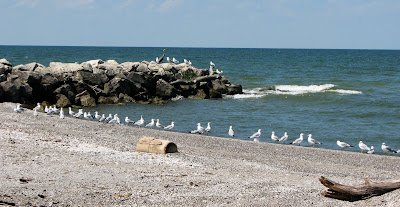 We got a laugh out of how the seagulls lined up on shore,
respecting the personal space of each bird up and down the shore. 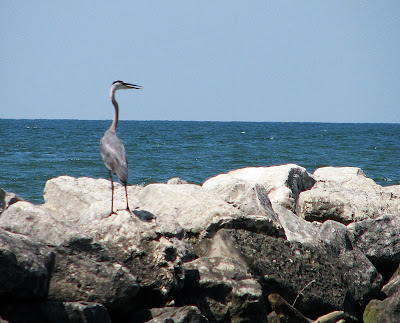 Our buddy, Boomerang (as my wife called him, because he kept coming back). This jetty was his base of operations. He would launch his daily fishing operations from here. 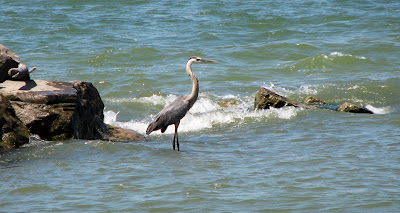 Here he is, initiating a fishing expedition. 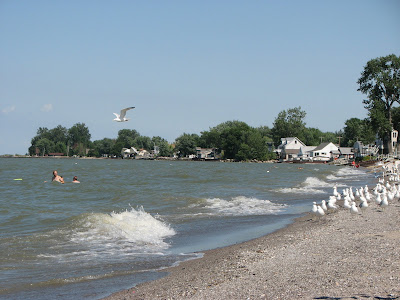 A look down the beach. 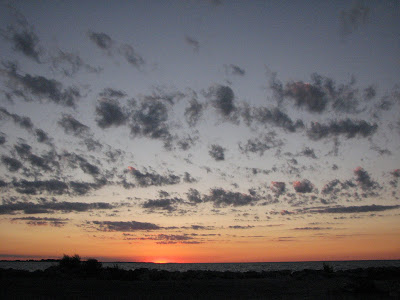 Ho, hum, another day, another sunset. (Actually, I could never tire of these!) 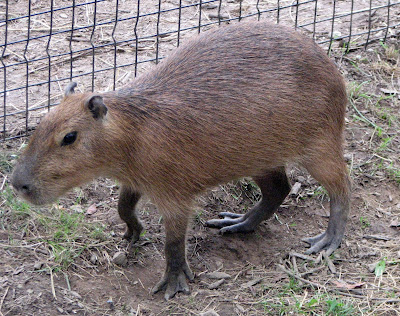 The side trip to our old fave, the African Wildlife Safari Park, is worth a post of its own, so this will be the only picture from that trip in this post. Anyhow, here is what they bill as the largest rodent there is. Know the name of this particular specimen? Want one for a pet? 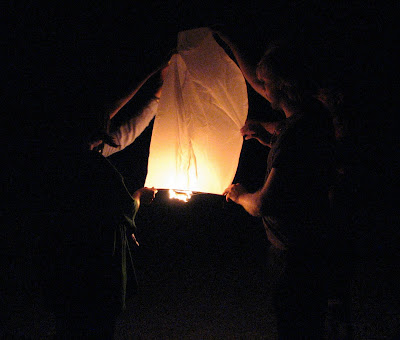 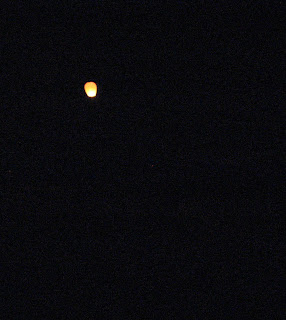 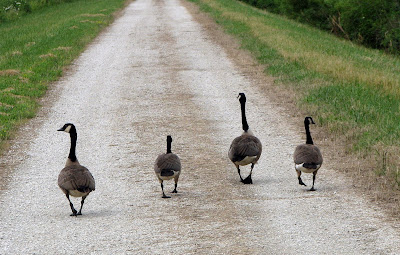 Another family enjoying their day at the Ottawa National Wildlife Refuge. Are they tourists, or are they one of the attractions, eh? I am not sure. 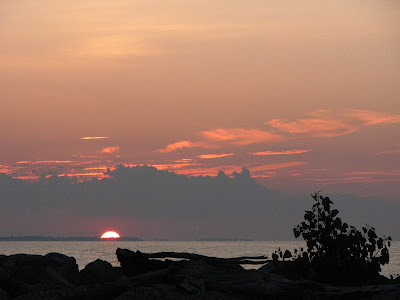 Sidebar: I've been back at work two days now and, I've got to say, as I review these pictures and remember those gentle, lapping waves, I'm ready for a vacation.