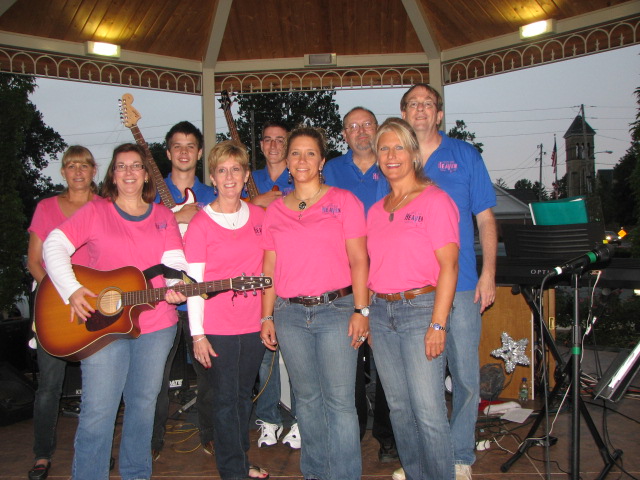 Just to represent the highlights of the waning summer, here is a group photo of our little ol' bank from church (said church actually making it into this picture, with the steeple back there on the right hand side).  We went out on our second annual "world tour" on August 11, traveling all the way down to this downtown park with a suitable gazebo and plenty of grassy area for folks to bring folding chairs.  It was a lot of fun, aside from the rain that settled in for the last couple of songs, causing us to shorten the set list by a tune or two.  Interesting factoid: the woman on the lower left-hand corner does not actually play guitar.  But she can sing. 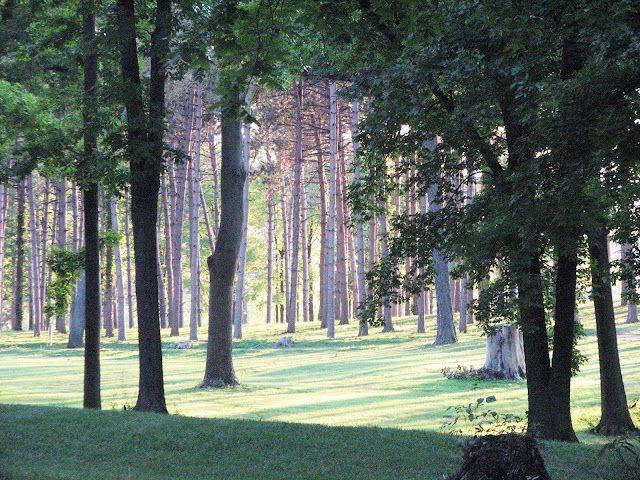 We were down at the reservoir park with the dogs a week or so ago and I liked the way the light was infiltrating a portion of the woods here, casting a kinda Kincaidian light, if you will. 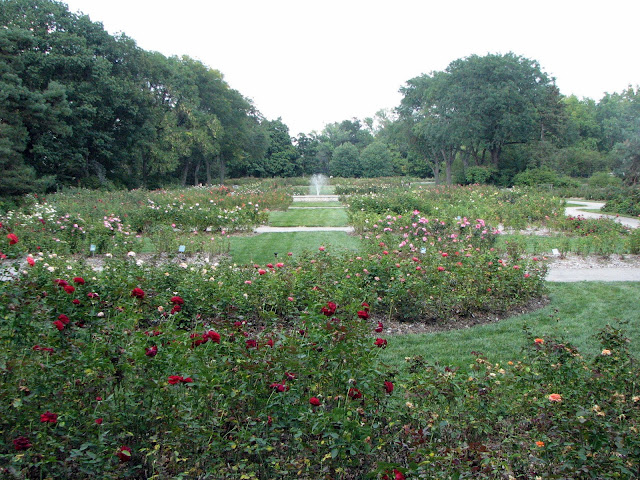 Then just yesterday, we went down to Columbus to celebrate our son's birthday and took him and his girlfriend out to a Japanese steak house.  I enjoy those places, and have been known to aggravate my wife on numerous occasions while clumsily trying to emulate the sounds and motions of the Japanese cooks who prepare the food in front of you, banging on and rattling utensils, flipping foods around and catching them on spatulas, etc.  Its' great fun.  Watching more than attempting in one's own home. 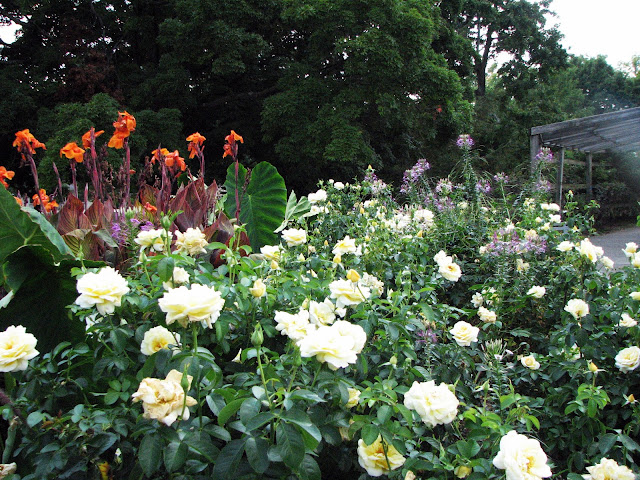 So, anyway, there are clearly not pictures of a Japanese steak house.  After we ate, William's girl friend unfortunately had to go to work, but the three of us went on to check out the Garden of Roses in Whetstone Park up in the Clintonville section of Columbus.  It is an amazing place, and a friend on Facebook informed me that it would likely be moreso in June when there would be many more roses blooming.  But when we saw it yesterday, it was not bad. 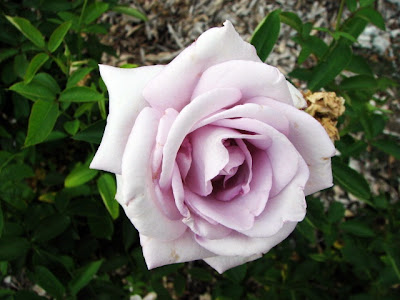 I was amazed at the variety of colors among the roses. 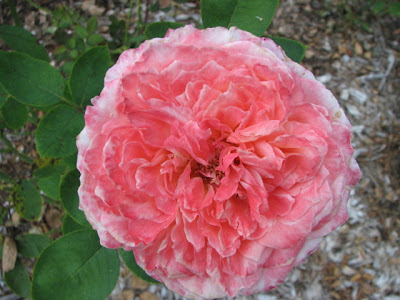 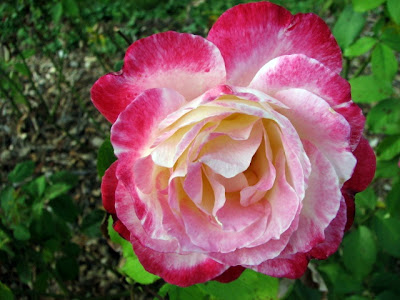 This is the view of the place from a nice little observation platform.  I am a sucker for observation platforms, whether in Gettysburg, a park out in the middle of nowhere, or an urban rose garden.  The grass was a bit scorched there on the left in the back, but whose isn't this summer? 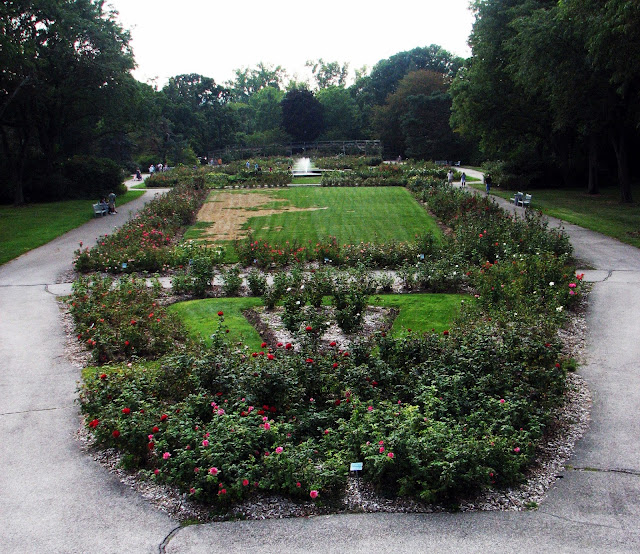 And a few more pictures from the Garden of Roses. 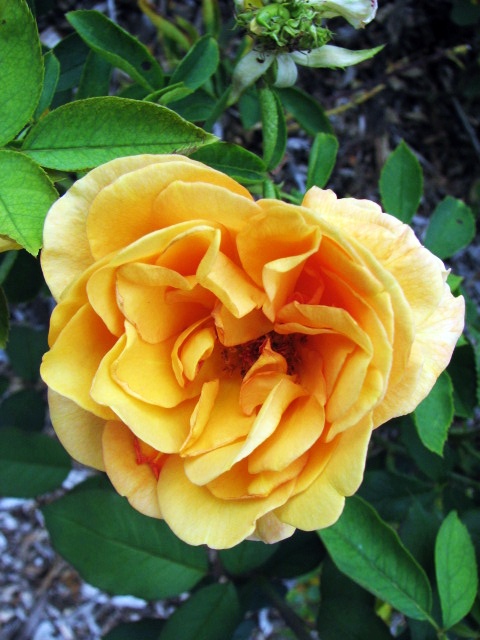 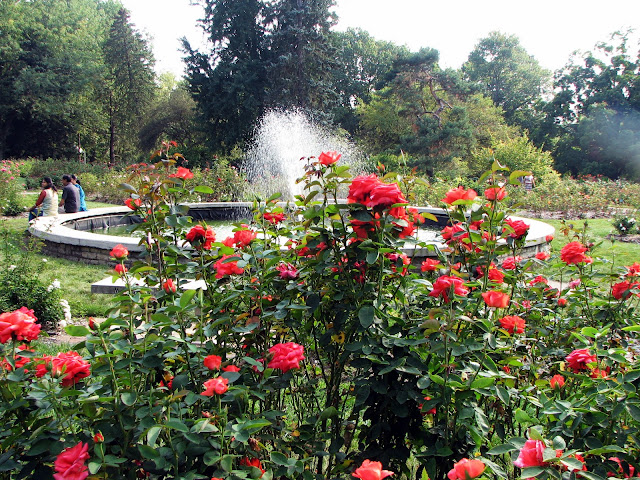 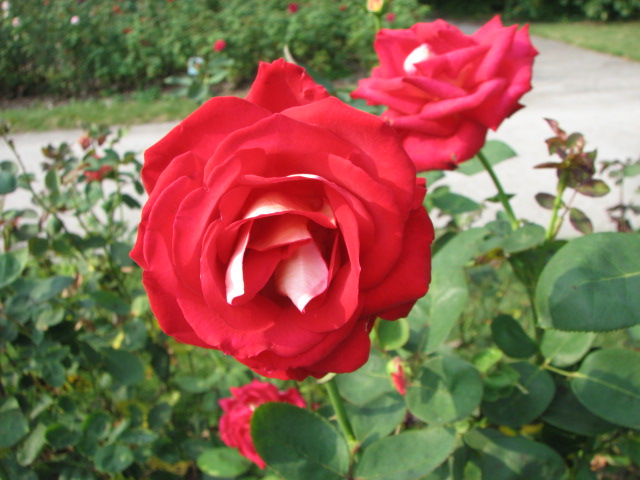 American Politics, Appropriately, in a Nutshell

So Mitt picked Paul Ryan as running mate.  This is actually not a bad thing, as Mr. Ryan seems to actually have ideas.  I may not be a big fan of all his ideas, but at least he seems to be known as "that guy who came up with something".  The hope now is that the freight train of refuse known as the '12 presidential campaign, heading for the landfill we call Election Day '12, may actually turn away from the name calling and gaffe generation and focus, maybe just a wee bit, on things like -- oh, I don't know -- the economy, the need for jobs that support families, the global sea change in economics and productivity that has irreversibly shrunk the manufacturing workforce, the need to assist people that need to get back on their feet, and so on.  At least Paul Ryan put something on the table, and now it could be discussed and dissected.

Of course, Paul Ryan is what would have once been called radical right.  Now he is a "Tea Party Pleaser".  This maneuver seals up what I consider to be the basic tenet of politics as we know them today.

Several years ago, there was a kid in my church who was talking about some of the rules at a summer camp, one of which was "no purpling".  Assigning the color red to girls, blue to boys, the concept here was that the two should not mix, at least not beyond some platonic level of friendly discourse.

Well, that's where we are as a nation.  Blues, stay over there in your corner and just get bluer.  Reds, you are over there.  Now, behave like you all just used the best detergent available - making the blues even bluer, the reds even redder.  All of you, just keep talking to each other, encouraging each other, distancing yourself from those crazy extremists over on the other side.  And if you try to chat with someone over there on the other side, you will be excused from the game.

It's always fun to take the camera out when some flowers are in bloom, throw the lens on "SuperMacro" mode, and see where the camera decides to focus (obviously, this is not a seasoned photog speaking).  Anyhow, despite the drought conditions, the flowers are blooming up a storm. Here are a choice few pictures I have taken recently, mainly up and down the driveway. 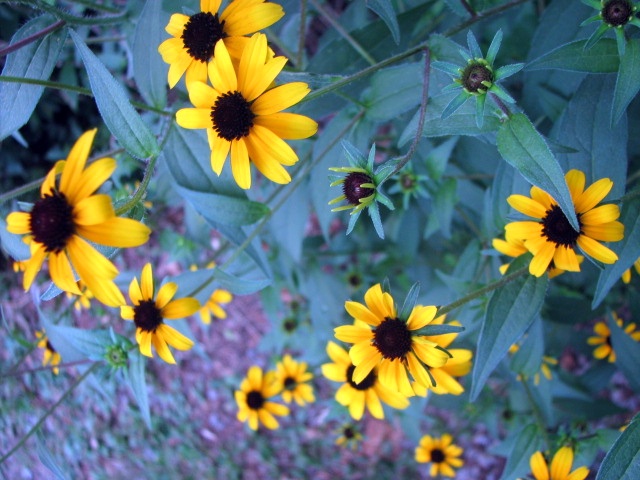 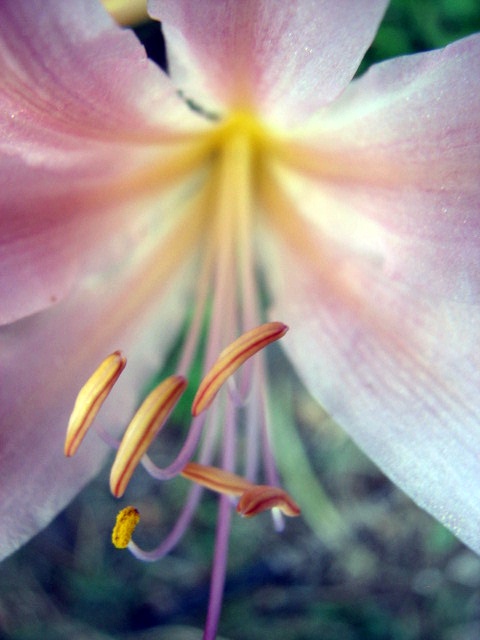 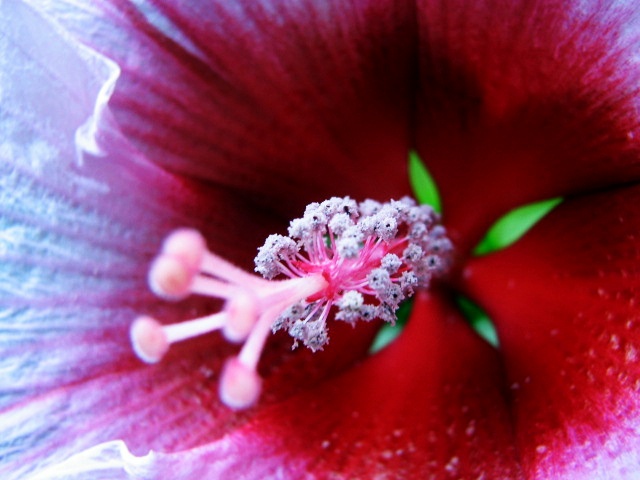 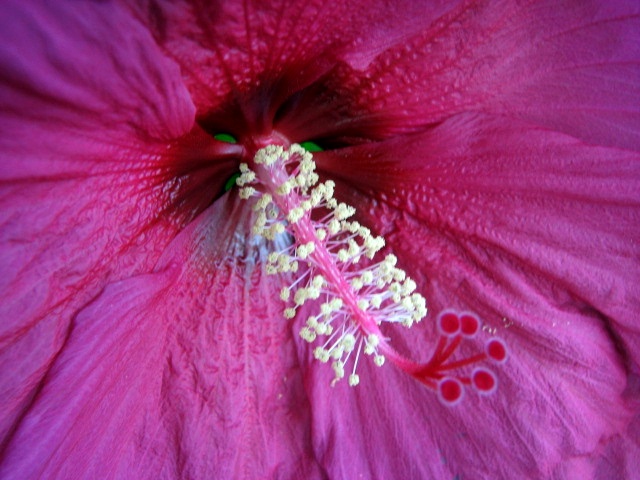 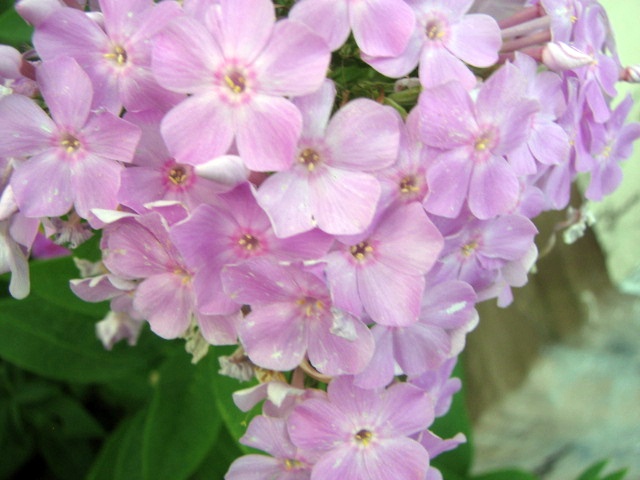 Meanwhile, the dogs of summer continue to guard the fort. 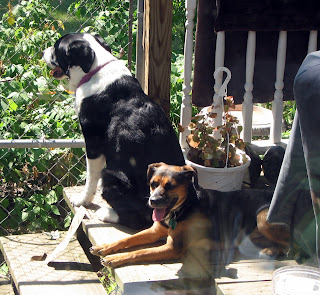 "Just Taste-Testing 'em For Ya! Honest!" 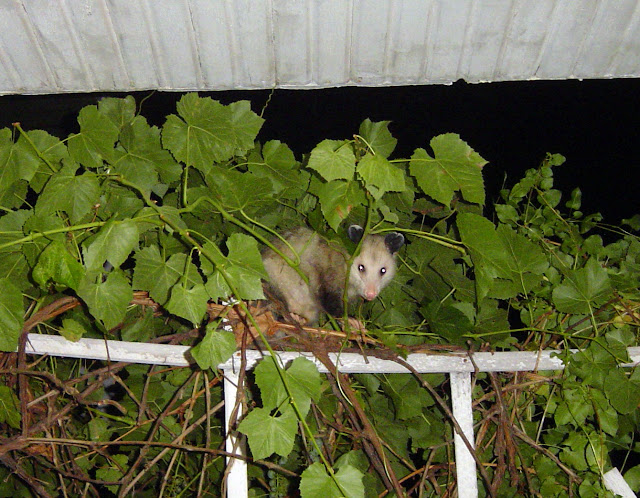 My wife often stays up later than I do on weeknights.  Such was the case when, some time after midnight last night, she found this little guy on the third shift doing some quality control testing on the grape trellis.
Posted by Ben at 9:53 PM 2 comments:

The Occasional Nudge Back Toward Positivity

I am in this group on Facebook where the moderator or founder or whatever, a good guy named Cliff (see WIXY to the right), poses a "Question of the Day" and people respond.  Sometimes the question is just silly.  What is your favorite this or that.  Other times, once in a while, the question dances around politics or religion or other netherlands for discussion.  And there are a few people in the group who attack such questions with both barrels.

Today's question, for reasons I cannot fully explain, was my favorite one yet.  It was simply this "


What is one of your simple joys?

First, it was kind of fun reviewing in my mind what I considered to be the source of simple joy.  I finally decided on this:

" I like to go out on the deck last thing at night, just sit out there listening to the crickets and locusts, watch the dogs sniff around, and count my blessings."

This is actually something I do on a regular basis.  A few minutes of quiet out on that deck, in the darkness, thinking about the good things bestowed upon me, helps put the rest of the day, with its frenetic failures and foibles, in perspective.

But aside from my own recipe for calm, I enjoyed reading what others had to say about their simple joy inducers.  Here is a sampling:

My three year old son reading to my husband and I at bedtime.

Feeling safe and loved is the best of simple joys.

seeing my one year old grandson.

Coffee, watching the sunrise and listening to the birds.

A cold beer and a fine cigar.

Getting a "Good Morning" text each morning from my guy to start start off my day....

rain on a tin roof, a beach at sunset, my husband's smile, the vioce of my grandson, and all the above.

Holding hands with my husband is good for me.

forgot to mention my cat. he is a great joy to me

As I read these, it struck me that the "simple joys" are far superior to the more complicated joys that we try to manufacture.  The best time of the day is often out where nature, Creation, or whatever you call it is front and center.  Or it's when you connect, even just superficially (a texted "good morning") with a loved one or good friend.

Or when you can get a good, simple laugh out of something.  For example, here is another reply to today's question...