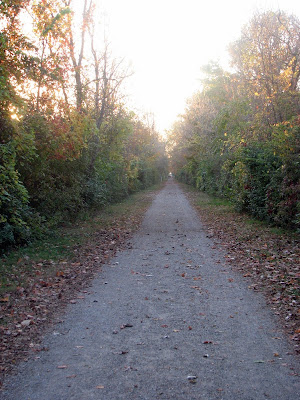 Basically, one the times when I am happiest is when I am hiking or just walking on a trail somewhere. It is one of my favorite things to do. There is something about not knowing what's around the next bend.

Well, the trail we were on this afternoon does not lend itself to bends, since it is one of those "rails to trails" deals where trains once rode along the trail. So, not so many hairpin turns or abrupt changes in elevation.

Another thing I like about trails is it tends to bring out the best in people. We passed maybe twelve people today - not a lot, but the point is, they all said hello. A couple teenagers started chatting with us in detail about the railroad bridge we were looking at. When I am downtown, or in a mall, or anywhere in "civilization", I do not get 100 percent "hello". Not even close. People on trails just seem to have this loosely affiliated comraderie. Maybe because everybody out there is pretty much there by choice - they want to be there, they are getting some good old exercise, and it's great to be out in an attractive place.

So, anyhow, a handful of pictures from our hour or so on the trail... 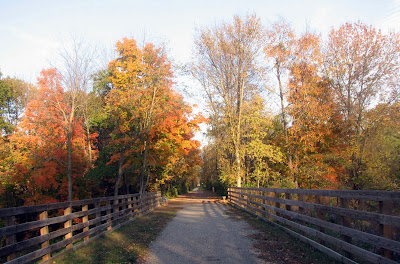 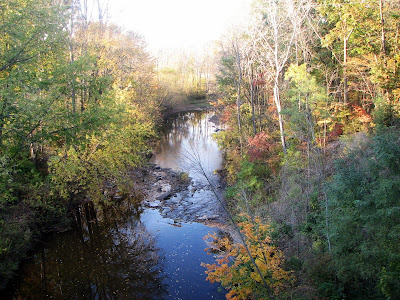 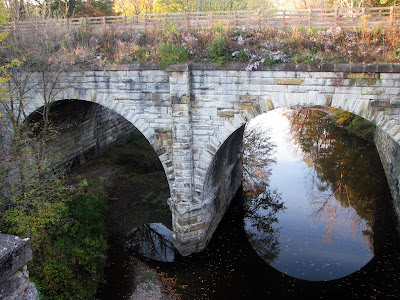 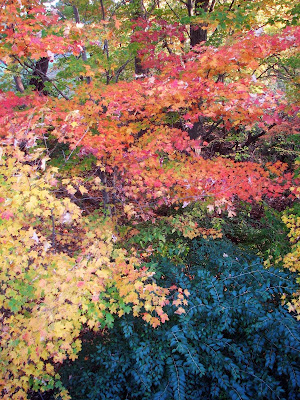 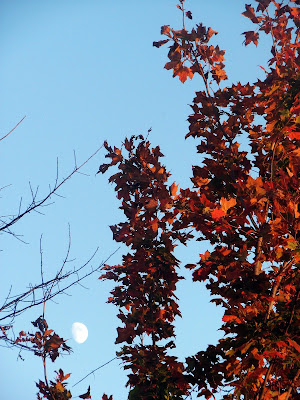 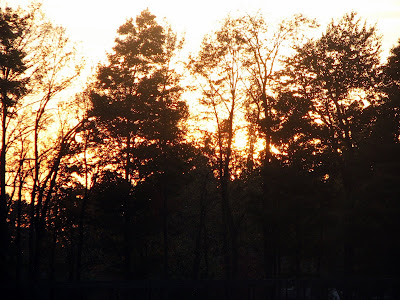 The TV's a-squawking about the changes either being made or that are promised to be made, depending upon whom you vote into office in three weeks. The changes that were promised two years ago may or may not sit well with the electorate, and big changes are being proffered by those on the outside looking in. It's a pretty volatile time in the hallowed halls of the nation's city halls, county courthouses, state houses, and the white building on Pennsylvania Avenue.

Meanwhile, out at the Conservation Club, change is coming, too. You wouldn't know it from the temperature, still peaking out in the mild and highly comfortable 70's. There is barely a breeze stirring the water, but the leaves tell the tale of a changing season. 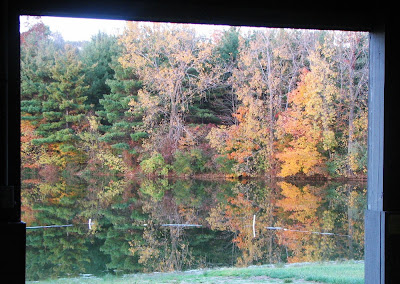 Those leaves seem to be clinging to the trees like we are clinging to the notion of summer. The deluge and the pressing need for a rake just hasn't happened yet. At church yesterday, the youth director announced the cancellation of the day's planned leaf raking project - and its postponement until nature ran her course, and the leaves let go. 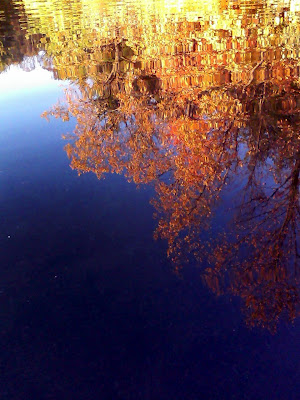 Yeah, I hate to let it go, too. The place just looks better with leaves on the trees. But, Mother Nature knows what she's doing, and I am sure the trees can weather the wet snow and chilling Alberta Clippers much better when stripped down to streamlined branches.

So, change is occurring and there is nothing you can do about it short of moving to one of those regions where they don't know what the four seasons are all about. Like most great things, the beauty of autumn is far too fleeting; I recommend getting out and gawking while you can. 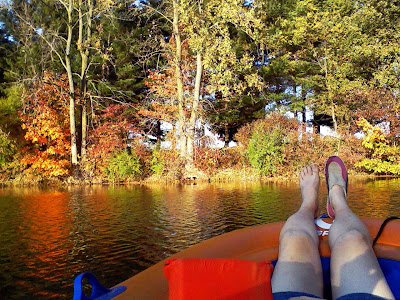 Not much time left for the luxury of floating around,
catching the warm sun on the water
Posted by Ben at 10:33 PM 4 comments: