Backed Up in Baltimore

The Z-A installment this week will be a bit late. I am back in Baltimore, the land of my boyhood, so bear with and we'll be back!
Posted by Ben at 11:08 AM 9 comments:

Xavier's Escort cruised and careened down the causeway, headed home, a crazy old Cowsills cassette in the console (It came with the car). Within hours, he completed his course, climbing the concrete drive to the cottage he called home.

Home. It had a calming, almost cryptic quality to it. He cracked the door, entered the cottage, checked the cabinets and closets, and crossed over to the couch. Next, he called Charlie, his old crony from college who lived closer to the city.

"Hey Charlie. I've come back. Time to catch up. Want to hit the cafe for a coffee?"
"Sure it's been a coon's age since we've been out carousing - but I totaled my Corvette on the Cutchersville Curve. Talk about a calamity! So I'll have to call a cab."
"Nah, I'll come by, if you don't complain about my choice of car."

Later, amidst the cacophony in the Corner Cafe, Charlie and Xavier concentrated on the challenges of communicating coherently.
"So, Charlie, bring me up to current times."
"Well, we didn't collapse in your absence. But my career is in the crapper. They conveniently conducted a downsizing - contracting my work to the Chinese."
"My condolences," Xavier commiserated. "Welcome to the club."
"Eh, I'll come through in the clutch. Those callous clowns can't contain me! I'll have them capitulate!"
"It's a cruel world, Charlie. Bunch of creeps."
"Why all the cheer, Xave? You seem...cold."
"Oh, I keep clinging to..."
"Ah, a chance to cavort with, what was her name?"
"Uh, Wendy."
"Yeah, Wendy. Have you called her?"
"Have I called her? Of COURSE I called her!"
"And...?"
"Some cad answered the call, like he camped out there constantly."
Charlie composed his thoughts.
"So what's this 'cad' called?"
"Said he was 'Ed". Just "Ed here."
"Ah, Xavier, you ol' coot ... Ed? Ed's her cousin from Cleveland, came down for Christmas!"
Xavier cooled down a bit. His cause was alive!
Posted by Ben at 9:37 PM 5 comments:

I put 671 miles on the car in four days this week, all in Ohio except one trip over the bridge into Wheeling, WV. It was all work related. Two days in Morgan County (population around 14,000) interviewing people about what makes the local economy tick. Interestingly, many feel Morgan and its like weather the current recession much better than, say, my home county in NW Ohio where there's too much reliance on the Automobile. Down there, they had their shakeout, and their industrial sector is actually growing of late.

The new Chinese buffet in Morgan County's county seat, McConnelsville (pop.: about 2,000), is doing well, but it's hard to fill the seats with moviegoers in the Opera House. However, the Ohio Valley Opry does pack the place with connoisseurs of county, gospel, and bluegrass on the third Saturday of every month.

And the Quakers - perhaps 25 of them - still assemble on Sunday in Chesterhill (pop.: maybe 500) in the same place they have come since 1834. They follow up their time of silent contemplation with a lunch gathering in the next room.

Chesterhill, like McConnelsville, also has a working theater, the Union Hall, and a new geneaological museum. Chesterhill's Mayor was telling me about the most difficult day in his career, when the Klan showed up, deputies arrived, guns drawn, and things could have gotten more dicey than they were.

I also had meetings in two other counties, and here are some of my pictures from those 671 miles on the road. 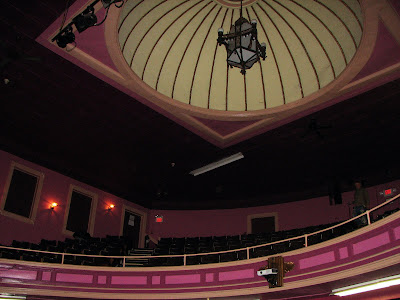 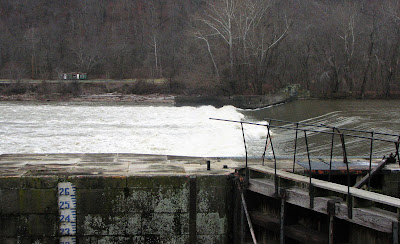 At Rokeby Lock on the Muskingum River 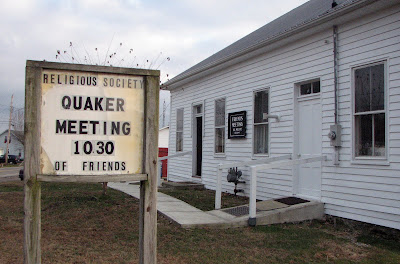 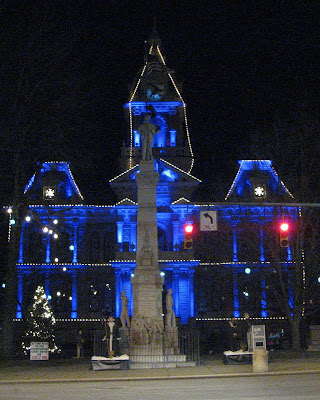 The Guernsey County Courthouse - a light show every half hour! 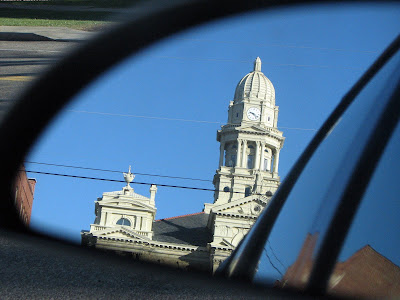 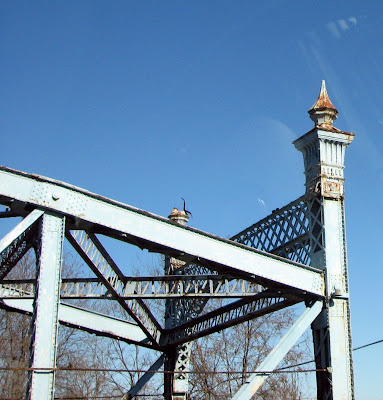 Detail on a railroad bridge crossing the Ohio into Wheeling. They don't make 'em like this any more. 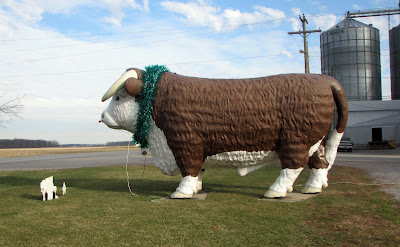 Finally - the Gilboa Cow (Putnam County), decked out for the holidays (also appears to the right)

Z-a Monday: Doggone it, just too darned busy for details 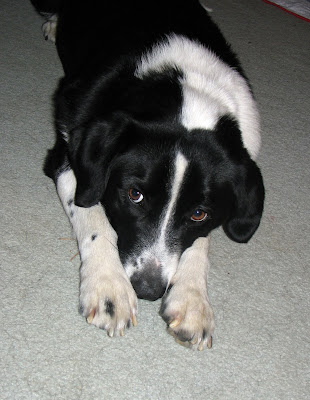 Details, like continuing the drama of Xavier et al. Just said goodbye to a houseful of Christmas company and now I'm a packin' for a work related trip (Drudgery!) So we'll dodge this issue and derail the story for a day or two, depending on whether we find Internet at the destination.

Meanwhile, some more dog pictures featureing our orphan, Oliver, and visiting grand-dog-puggle Lilly, to entertain the reader. Who doesn't delight in dog pix? (And if we have to do this again next week, dibs on "Canine") 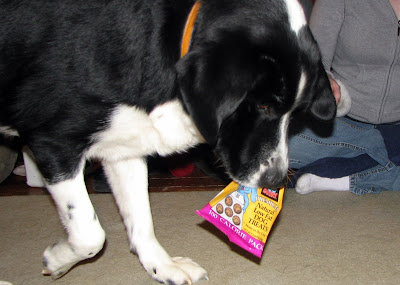 Here he is, hauling his "stocking stuffer" off to a lair or something... 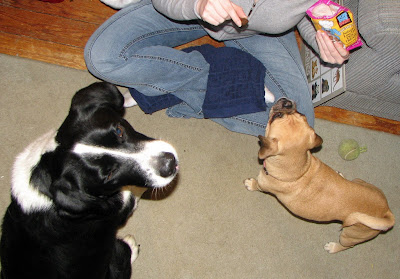 "are you talking to me? ARE YOU TALKING TO ME???"
- - - -
And then a friend brought this box of balloon structures the skilled balloonist could create. Our son spent a couple exciting hours constructing inflated replicas of the White House and the Golden Gate bridge. Here is 1600 Pennsylvania Avenue... 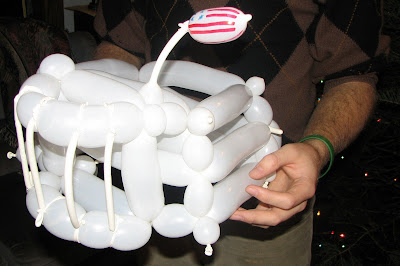 And the bridge? (He had to work with the colors he was given...) 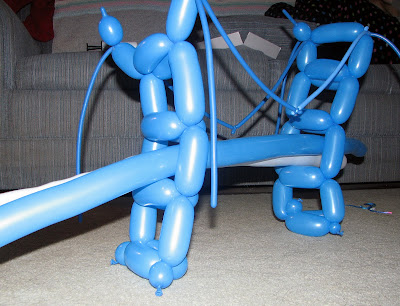 Despite these incredible feats of architectural excellence, I think he will continue to apply to grad schools. And it strikes me that we have strayed entirely from the use of the letter "D", to which I can only say 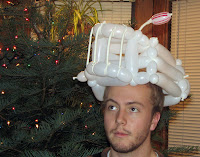 Z-A Monday: The Essence of the E Edition

Energized and elated - almost egotistical! - over the bus episode, Xavier found an eatery (he was famished) and ordered the eggs benedict with eggplant and endives, eschewing the escargot. Once he'd eaten, and seeking a way to exit this town and hit the expressway for home, he expended his last funds on an old Escort wagon. Not exactly his dream escape, but a good enough vehicle in which to entertain the end of this extended expedition.

And so he embarked on the final episode of this epic event. He was enthused about re-entering Planet Earth, getting employed again, earning a living, maybe extending his education. He was no Einstein egghead, but he could emerge as an entrepreneur, maybe an executive...

Then his thoughts evolved to encounter the elephant in the room. Wendy, to whom he had hoped to be engaged, with whom he had hoped to elope. Now his ex-girlfriend, from whom he felt exiled. Not exactly a euphoric event, was it? If he could erase or eliminate that exchange, he'd be ecstatic. But it existed, and he'd endure it, endlessly.

No more equivocating! No more evasiveness! He'd exhausted all the reasons not to call.

Filled with emotion, he entered her number. After an eternity, someone answered.

He ended the call.

The Escort drove on into the evening.
Posted by Ben at 9:19 PM 3 comments:

please bear with us...

Xavier's continued Existence will have to wait a tad as we are on the road, in Cincinnati (Xavier should actually be here by now) attending to a sad duty, paying respects to an uncle who passed away a couple days ago. I saw him quite a bit when we cousins were all young and spending summers at the Grandparents' house in the woods, on the water. Some idyllic summers and some great memories. Perhaps my most lasting memory of my uncle, though, was the afternoon we spent in the yard back home, several of us cousins and neighborhood buddies, catching footballs my uncle heaved repeatedly over the largest birch tree in the yard. Then there is the audible memory of his hearty laugh - you knew when he was in the room, with that great laugh.

We'll get back to Xavier later this week, but for now I guess I'd better appreciate the suite they bumped us up to here - no questions asked. Two TVs, three phones, fridge, a little "sitting room", and yeah, free internet service.
Posted by Ben at 11:44 PM 6 comments: