I had watched the (highly recommended!) 4 (plus) hour movie about the battle. I also read a short book about the battle by renowned Civil War historian James McPherson. And the preparation was valuable, so I came in knowing a little about the battle logistics and some of the comings and goings, but no amount study can prepare you for being there on site where, nearly 150 years ago, 75,000 Confederate and 90,000 Union soldiers converged on this town of, at the time, about 2,400 people. The casualties were horrific: 11,000 died on this battlefield, another 29,000 were wounded (many of whom would not survive), and about 10,000 more went "missing". It is hard to reconcile those numbers with the natural beauty of the place while walking around on a gorgeous spring day.

Here are just a few of the pictures I snapped while making the rounds. 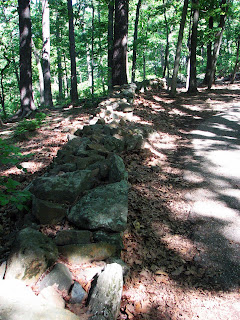 If you saw the "Gettysburg" movie, you likely remember the scenes involving Colonel Joshua Lawrence Chamberlain, a former Bowdoin College Professor who commanded the Twentieth Maine brigade. His men were tasked with maintaining the left flank of a long line of Union soldiers. The picture above is a portion of the line the Twentieth Maine defended. They repelled repeated waves of Confederate soldiers with their ammunition. When yet another surge of Confederates approached them, the Twentieth was virtually out of ammo; Col. Chamberlain, knowing the importance of holding this high ground, proceeded to order his men to "fix bayonettes!" That they did, and they held their position. 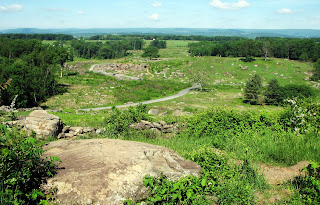 This picture is looking down from Little Roundtop toward an area known as Devil's Den, where a particularly bloody battle raged for about 90 minutes, with scores killed. 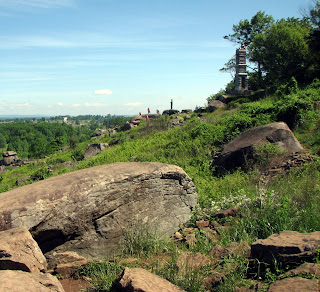 This picture, also from atop Little Round Top, gives you some idea of the terrain which the soldiers had to traverse. 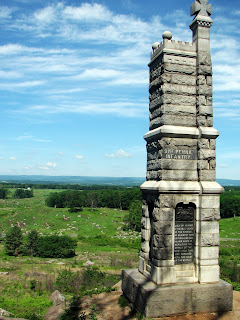 There are hundreds of monuments in the national park. The sheer number of monuments is a bit overwhelming. This one was erected to commemorate the 91st Pennsylvania infantry. And of all the monuments, to my eyes the most spectacular is this monument to the Pennsylvanians: 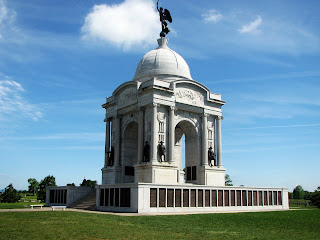 As I turned away from this monument, I noticed an unusual group of people walking past. There are reenactments going on fairly routinely in the park, cannon blasts and all. I cannot imagine fighting a war in the early July heat (this battle stretched out to three days, July 1-3, 1863) in the clothes these soldiers wore. But I suppose the heat was a relatively minor worry.

In the movie, there are scenes of Union strategists surveying the battle from the tower of the Lutheran Seminary in town. The seminary still stands, and I believe this is the tower with the strategic view. 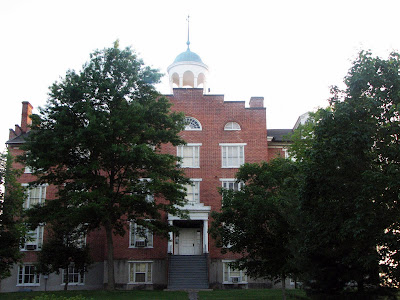 The line of cannon below are along the western "Seminary Ridge" where the Confederates were lined up.

Below is a picture taken from an observation tower along Seminary Ridge. In the background are Little (l) and Big (r) Roundtop. The Confederates were given the order to cross the fields and farms in this picture, toward the Union stronghold along Cemetery Ridge. 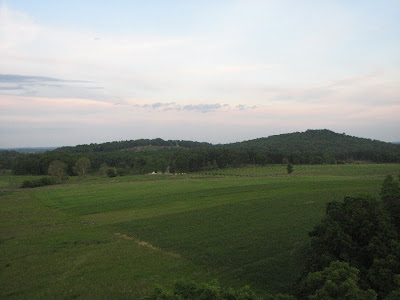 On the third day of battle, Virginia's Major General George E. Pickett led the charge across these fields. The line of Confederates was a mile long, condensing to some 600 feet, in multiple waves, as it approached the Union forces. As James McPherson put it, "It was an awesome spectacle that participants on both sides remembered until the end of their lives - which for many came within the next half hour." 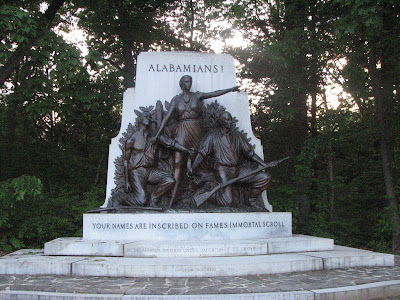 Another couple of examples of the monuments at Gettysburg. 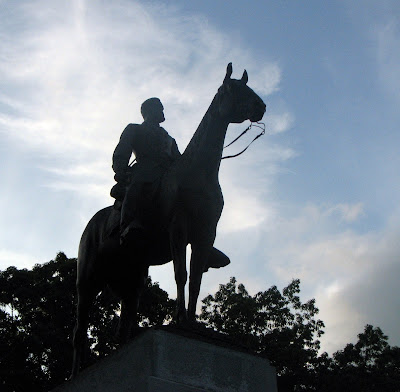 This may not be the battle or the war that most readily comes to mind at Memorial Day, but it was a vivid reminder to me of the price paid by soldiers to defend their cause, and the realities of casualties on the battlefield. My hat is off to all those who followed and especially those who, like those buried at Gettysburg, did not make it home.
Posted by Ben at 9:35 PM 4 comments:

Had to take a work-related drive with three co-workers to Bradford, PA, a city of 9,000 people in NW Pennsylvania. We took our time getting there Thursday, eating in this lovely Victorian style restaurant in little Waterford, PA. 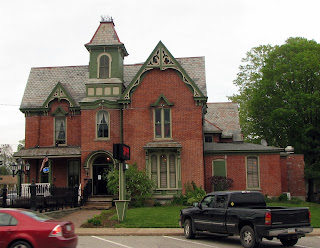 We did not eat at the "Dinor". What's up with that spelling? 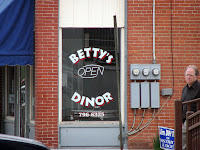 We drove on through the Allegheny National Forest - had to stop somewhere along the trip to let five deer cross the road. The fifth one, a youngster, had to think about crossing the four lanes for a while, but finally dashed across to our applause. Sorta wish I gor a picture of that crew.

Made a stop for a photo opp at the Kinzua Dam, along the Allegheny River, deep into the forest. Lots of water spilling out of that thing. Note the intrepid fishermen in the lower right corner... 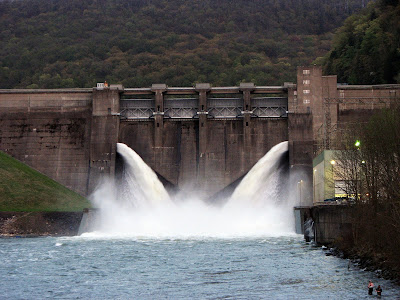 Bradford has an interesting history. It once produced 87 percent of our nation's oil courtesy of the country's first petroleum refinery. I sort of wish it still did. It is also home of the Zippo museum, operated by those lighter makers. It is the big industry in town, evidently. Here are pix of the museum, an odd vehicle on the museum grounds, and downtown Bradford... 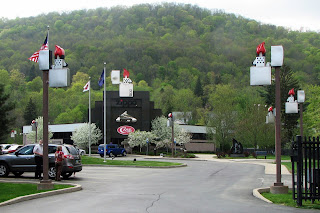 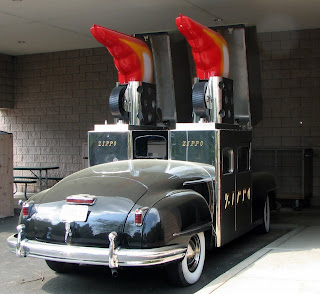 liked the architectural detail on the building below, but its condition reflects the local economy and that of dozens of midwestern towns much like Bradford. 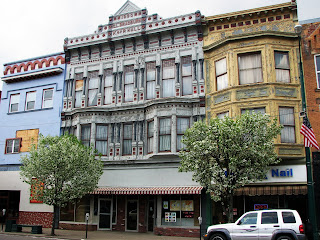 And here is Bradford's "skyscraper"... 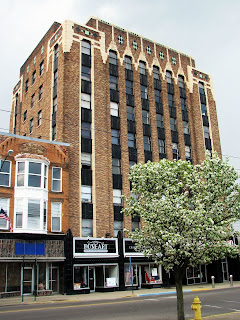 Meanwhile, back home, today, we took a little side trip up to Vermilion, a fairly charming town on Lake Erie, home of a maritime museum, and a nice place to check out once in a while. We had lunch at a place called the Woodstock Cafe. They feature live music at night, and carry out a sorta hippie theme with their decor. We watched a couple dogs chasing sticks at the public beach, then the rain and fog came, so we moved on. A nice little diversion for a couple hours... 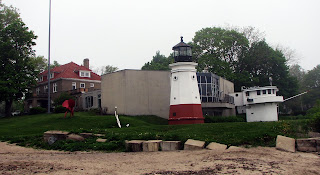 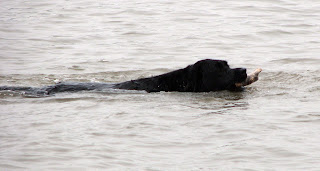 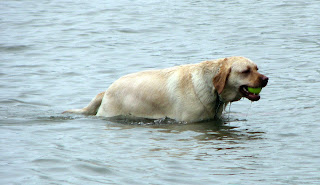 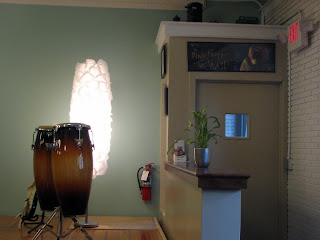 Inside the Woodstock Cafe. That odd light thing appears to be constructed of coffee filters... 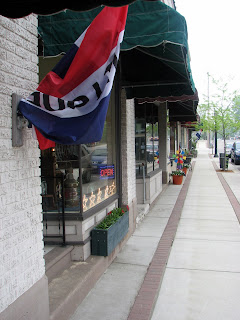 Downtown Vermilion and (below) a bleak day for boating, eh? 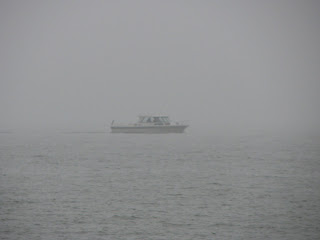