In doing my research here in the Streetpolo Labs, I found there was so much GREEN stuff out there in pop culture that we're going to have us a little green quiz here. How many of the following GREEN something or others can you name? Answers will be posted Wednesday or thereabouts, for those who care to check back. Get 'em all, and you're a green expert!
ANSWERS ARE NOW ADDED IN CAPS 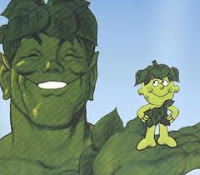 extra credit for the little guy on the right...
THE JOLLY (HOHOHO) GREEN GIANT AND LITTLE SPROUT.

I WOULD NOT EAT GREEN EGGS AND HAM, SAM I AM 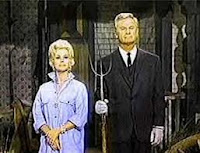 Green acres is the place to be
Farm living is the life for me
Land spreading out,
so far and wide
Keep Manhattan,
just give me that countryside. 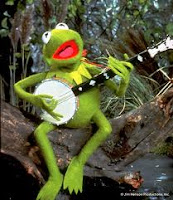 What song is Kermie singing?
IT'S KERMIT AND GORDON IS PROBABLY RIGHT THAT HERE HE IS CROONING "RAINBOW CONNECTION". BUT FOR OBVIOUS REASONS I WAS THINKING OF "IT'S NOT EASY BEING GREEN" 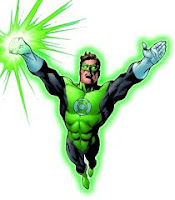 THIS WOULD BE THE GREEN LANTERN, WITH WHICH (OR WHOM) I AM NOT FAMILIAR In the picture above, it's the guy on the right, not the Capt....
I GREW UP WITH THESE GUYS...CAPT. KANGAROO AND THE INESTIMABLE MR. GREEN JEANS 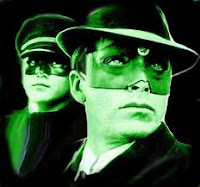 THE GREEN MILE - AS SUZY SAID, SAD BUT REALLY GOOD 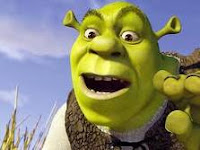 OK, the word "green" is not in his name, but dang it, he's pretty green.
IF YOU DID NOT GUESS SHREK, I AM AMAZED 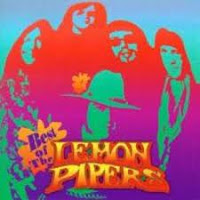 And their biggest hit was...
GREEN TAMBOURINE. THE FOLLOWUP WAS "RICE IS NICE" AND IT DID NOT SCORE VERY HIGH ON THE CHARTS.

THE HOUSE OF GREEN GABLES 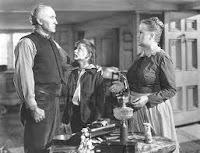 A SCENE FROM "HOW GREEN WAS MY VALLEY"

NEXT WEEK: WE ATTACK THE BLUES! 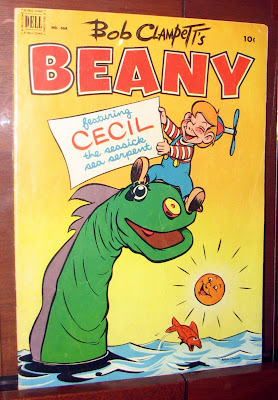 From the collection at Geppi's Entertainment Museum (read on...)

Well, unlike Orange last week, I could not pin down some major life-changing era that involved the color yellow. My past is littered with a few yellow items, such as (my sister reminded me of this one) our elementary school bus. We lived a little too close to the school for free transport, so our parents paid a full dollar per week so we could ride what was affectionately known as the "pay crate". Yeah, it was an old bus, with an old driver, who even had an old bus driver type name: Mr. Meekins. The only notable "pay crate" experience I can recall is when we would round a corner some days, and we'd all crowd over on the "outside" side of the bus to see if we could tip it over. Never came close. They build those things pretty much kid-tip-proof.

More recently, we just got back from a vacation to my homeland (Baltimore) with a brief stop on the way in the Pennsylvania Laurel Highlands area. Their Ohiopyle State Park is a very nice blend of hills, woods, and waterfalls.

While in Baltimore, we met some friends at one of those outdoor "lifestyle centers" that have overtaken malls. In the center of all the stores and restaurants was this fountain that turned yellow at night. 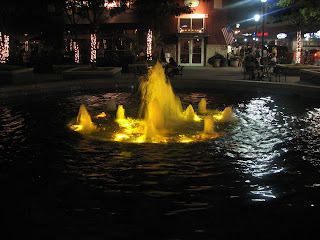 Also in Baltimore, we checked out a thing called Geppy's Entertainment (Popular Culture) Museum. There were some yellow things there, so they will have to do as far as photographic representation goes. On the way in, we were met by this yellowish nature scene amongst the lantana. 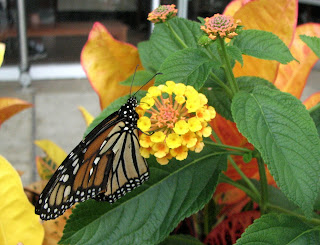 Now, on into the museum. One of the first exhibits, from earlier history, was practically a whole room devoted to a character known as "The Yellow Kid". I guess he was part of his creator's contribution to what became the first regularly featured comic, Hogan's Alley. I am hoping that my son does not read this post (pretty good chance he won't) because this character quite creeped him out...and for good reason. I won't get into his whole history, but it involves some social commentary and the little booger seemed to lead young 'uns into a life of drink, smoke, and severe mis-spelling. He looked like this: 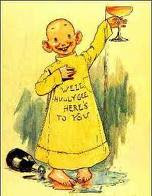 Let's move on. Remember "Jeep" from the Popeye cartoons? Well, here he is in all his glory: 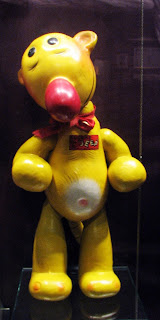 Who wouldn't want a plush Ms. Pac Man of their own? And in this liberated age, what kind of a name is Ms. Pac Man, anyway? Should it not be Ms. Pac Woman? 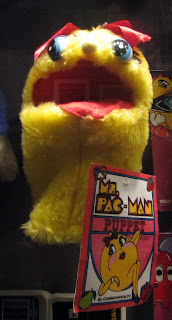 And finally, I think this product right here pretty much summarizes all that is great about American popular culture. I am certain that we hit a cultural peak, an apex if you will, when the Quaker Oats folks signed the contract with Mr. T to roll these bad boys out. 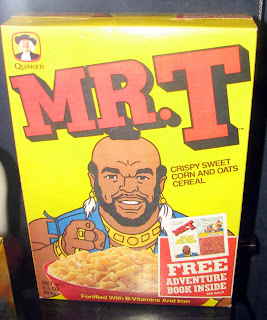 Just for the heck of it, here are a couple more pictures from the trip, just because. Have a great week; for more yellow goodness, visit Jen's blog. 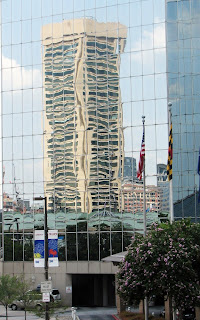 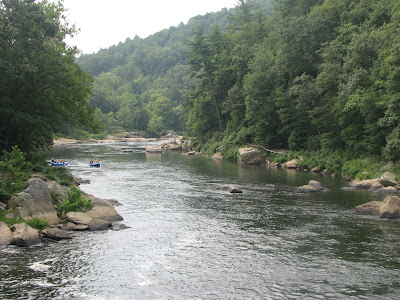 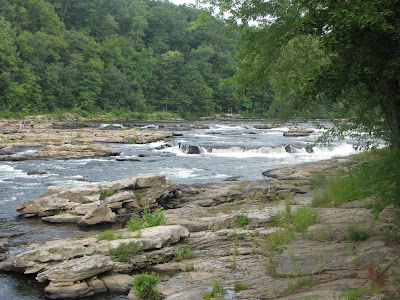 I know I am going to be away from this blog for a few days, so I had better take care of the next color in the spectrum right now. Last week, Jen started this meme where we do something about a different color each Monday. Last week was red; this Monday's is orange...

Ah, orange, the color that started it all, or at least my new life here in northern Ohio. I had taken a job up here knowing nobody. The landlord told me there was this young schoolteacher who had just moved in downstairs. I got around to meeting her and, before we knew it, we were out on the town on exciting dates at, say, the laundromat, or the bowling alley.

Anyhow, at the time, she APPEARED to be quite the fan of the color ORANGE. Her apartment reeked of the color: big ol' orange shag carpet. 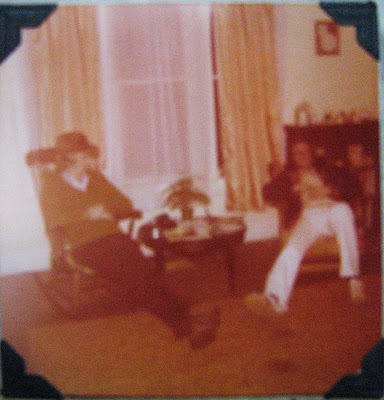 Entertaining my college room mate in the apartment with the orange carpet, circa 1979.
Note the orange curtains. I'm on the left, dapper in the hat.
Her car, a bright orange Chevy VEGA. Yes, it was a laughable model and not a highlight in the annals of the history of General Motors, but next to my ancient, rusting Volkswagen Beetle complete with holes in the floorboards and a dubious heating system, it was a fine ride. 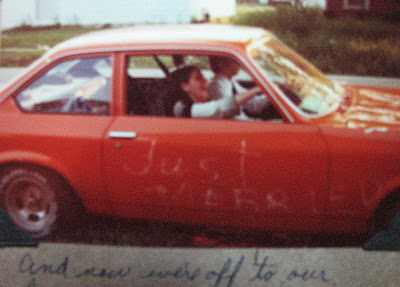 Off we go on our wedding day in that car of dreams, the mighty orange Vega...
Well, it turns out that she is (thankfully) not really a big orange fan; that's just what was happening in the late '70s. We are more into blues and natural wood and such now, although we still have the orange piano bench that came with the piano we bought the night before the blizzard of '78. It is orange's last hurrah around here, at least outside of Halloween.

Word is out that Jen has initiated a new meme dealing with color and basically working through the spectrum. So today it's Red Monday. So here is a picture of something red: 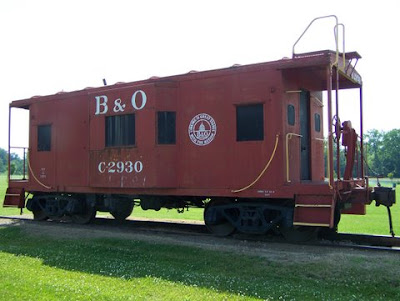 The caboose: retired vestige from a railroading past. I remember a short line train that used to squeak its way past our neighborhood twice a week. Usually maybe three or four boxcars and a caboose would follow the tired old switcher. Kids from down the tracks would hop on and ride the caboose into town. That's something that doesn't happen anymore, for a variety of reasons.

Now the railroads tack a tacky little blinking light on the last boxcar. Nobody to wave to, no romantic thoughts of riding the rails into the twilight. Just a blinking light wearing a battery down amidst all the very artful but illegible graffiti.

This particular caboose is on display in a park in North Baltimore, Ohio.
Posted by Ben at 8:28 PM 13 comments: