So "people gathering together" has been an odd theme that has followed me around this summer thus far. There was the sad yet celebratory service remembering the life of Tom Phillips (a previous post), an event that packed the house at the Methodist Church on the order of the prime-time Christmas Eve service. Then there was the Fourth of July, really the only day I know when townfolk of all stripes and clans gather in one place, first along a parade route, and then at the Fairgrounds to watch and hear what modern pyrotechnics has wrought. 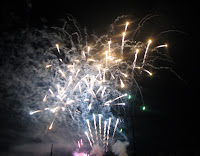 Yesterday, we went over to an interesting gathering at the nearby Alphonsus Parish church, where they were having their annual do all over the place. There was a softball tournament going on, and food and drink available everywhere, and games and so on. My wife was most interested in the silent auction, and that took some time for her to make some strategic bids.

Most interesting to me, nestled in among the church and social hall and residences, was a restored log cabin-like structure, dating back to 1878 or something, commemorating the presence of John Neumman, the first American Bishop to be canonized into sainthood (by Pope Paul VI in 1977), reassembled amongst the cornfields of the St. Alphonsus parish. The history of the place and its settlement by German families, with the site selected virtually by accident, was quite interesting to this non-Catholic. Anyhow, the unimposing log structure is dedicated as a prayer center, and there is a feeling of peace and quiet within its confines. It was well worth the side trip, as well as any money my wife dropped on the silent auction, and it reminded me of how many treasured points of interest there are within easy reach.

In fact, we had intended to make it up to the Village of Milan to possibly take in their museum on Sunday, but I chose to take an extended nap instead, evidently...

Friday presented another very important (in my view) example of people gathering together for a common cause. This was the evening of our community's Relay for Life (and to those reading this who responded to my "annual shameless request", another huge "thank you". As well as an "it's not too late..." aside...) This event, the eighth or so that we have attended, never fails to move me, with its spirit of hope and happiness, despite the time taken to remember those who fell to cancer in recent memory. 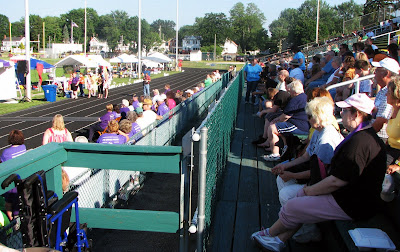 For those who have never attended, Relay for Life is a good time! There are sights, sounds, food, camaraderie, and that pervasive feel that money is being rounded up to fight one of the most important battles on Earth. A couple years ago, I always made the point of sticking around and staying all night with my son and, usually, a coterie of his friends. He has moved on and is no longer so readily available, and I miss those woozy three o'clock frisbee tosses and four o'clock poker runs around the track. OK, I do not miss the runs around the track so much. Perhaps I miss the ability to survive multiple laps with minimal damage.

The "survivor lap" - applause all the way around.
Anyhow, Linda and I head home around midnight now, once our team has sold our last hot dog and the last ice cream sundae, and the bounce house has been deflated, and the team's tent battened down for the night. It's not quite the same as making it all night until breakfast burrito time time at six, but on the other hand, any feeling of sad nostalgia is usually overcome by the soft bed and central air that greets us at home.

The next gathering on the docket is a couple days with friends from Linda's college years and assorted others - a group that has managed to get together somewhere in Ohio or Michigan on a nearly monthly basis since 1977 (well, actually before that, but that was the year I entered the picture). I guess this gathering together stuff is pretty intrinsic, pretty essential. I think some of the finest things people have done have probably resulted from gathering together for a cause, a purpose, or a desire.
-----------------

After the busy-ness of the St. Alphonsus festival, we found the absolute opposite of a gathering in the serenity of our local conservation club last night. The only gathering we found there were a gaggle of seven or eight geese beating a retreat when we showed up on "their" beach. You can just see them in the center, nearly at the trees. 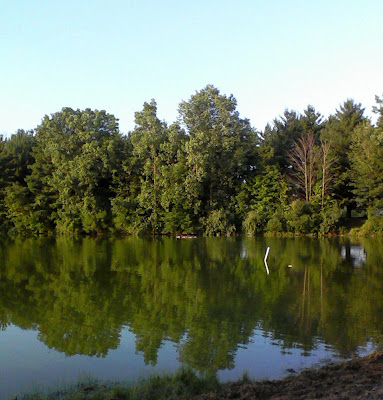 Finally, I liked this picture I took with the cell phone, shooting at the upside-down reflection of trees and clouds in the water. Sort of a Van Gogh-ishness to it, eh? 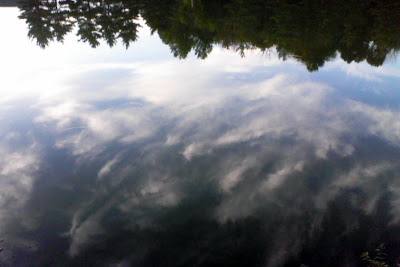 Scenes from the 4th 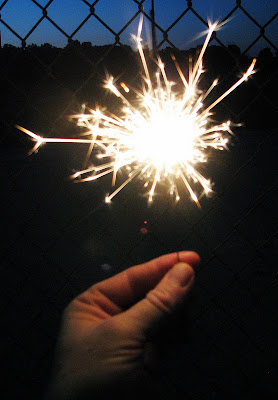 We had a marvelous weekend. Three-dayers are always good. For the first time in about five years, I got to watch the parade from the sidelines. It was about the same as it was five years ago, but it is still a pleasant tradition to see the community parade in front of you.

The fireworks were a good show. The steak on the barbie was especially tasty. And best of all, the family unit was all together for a few hours here and a few hours there. Here are some pictures from yesterday's festivities in Small Town USA... 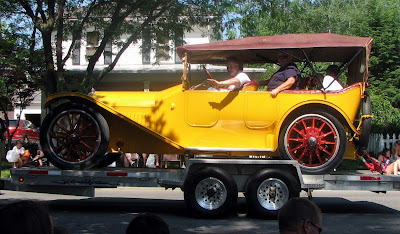 I guess this old car is the last one of its kind - and it has a connection to our town, where it was made. And the ones below are not exactly right off the production line... 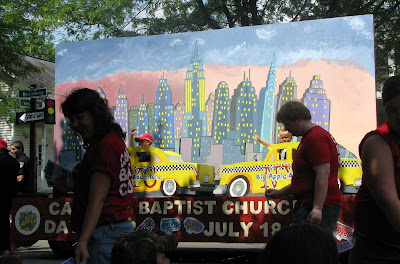 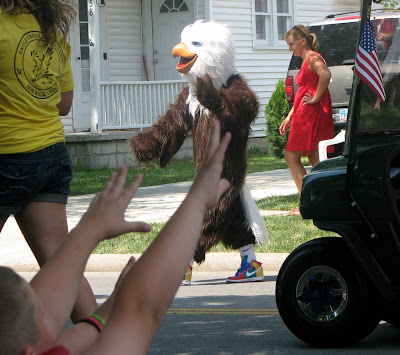 My wife points out to me that the kid was not reaching out with affection for the eagle. The kid was probably reaching out to get some candy being tossed his way. 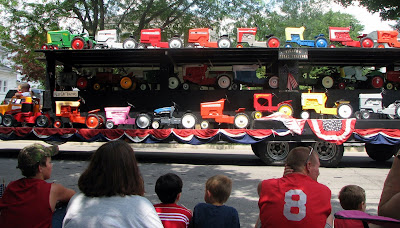 Ah, the rural Midwest, with its collectors of toy farm implements...

A flurry of kids from the local little league program... 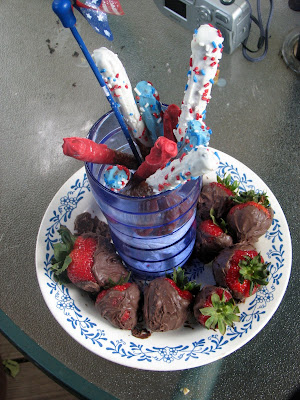 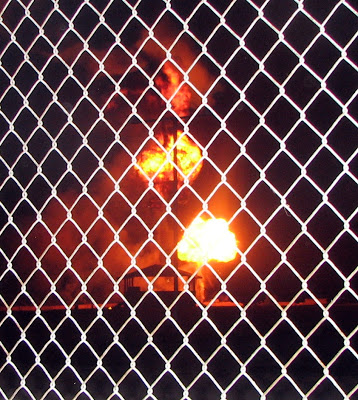 Does anyone know of any other place where the fireworks show includes these fireball things? You can feel the shock wave of heat when these things go off. 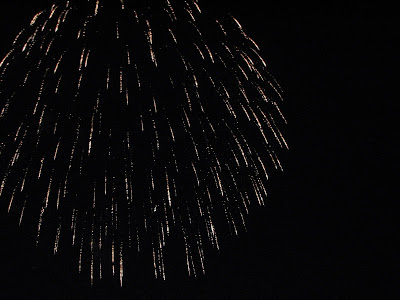 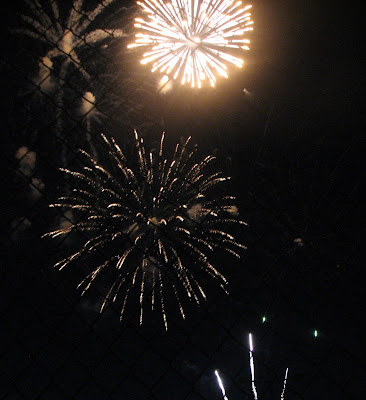 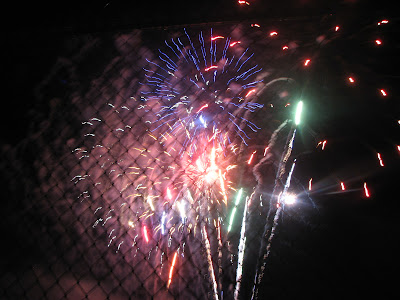 Hope you had a great Independence Day!
Posted by Ben at 10:16 PM 3 comments: