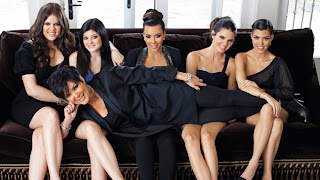 Okay, this really won't take long, and then I will feel better.  Maybe you will, too.  An item in this morning's paper sort of set me off.  It stated something like this: "Angelina Jolie snubs Stacy Keibler on Private Jet".  This caused me to stop chewing my cereal and ponder who in the world would need to read beyond this headline.  Does anyone need the deep facts behind the snub?  And how far has American journalism come when some editor decides to devote precious ink to this breaking, unfolding story?  This, in the age of the shrinking newspaper, where fewer stories are picked up, and fewer paragraphs are devoted to each story.  Right now, some editor is probably pondering: "Hmm, Europe's economy teetering on the brink of collapse, or, no..wait a minute!  Pretty sure that's a new hair color for Justin Bieber.  Run with the Bieber!"

I am aware that the National Enquirer and its ilk have been around since I was a small pup, and TV shows like Hollywood Extra or TMZ or whatever it's called populate the pre-primetime hour, and enough people turn in their Arbitrons or Nielsons saying they watch this stuff to generate advertising dollars and keep the shows running.  I am also aware that there has always been this fascination with our glamorous Hollywood "royalty", and the lives of the millionaire celebs.  I get that.

What I don't get are the objects of our fascination.  I will grant that the aforementioned Angelina Jolie has some acting acumen and in some quarters she is viewed as a humanitarian for taking on half the third world as her personal family.  So I am not so much pointing this discussion at her (except to note, again, that I do not understand why anyone would care who she snubs on a private jet, unless maybe it is the Pope, and even then, actually, I don't really care, although I may be a tad curious about the booking of THAT flight).

Back in the olden days, people were fascinated by the like of Grace Kelly, who gave up a pretty distinguished acting career to marry a Prince and become the Princess of Monaco.  Now, to me, that is interesting on several levels.  What movies did she appear in?  How does one throw that heady lifestyle and one's home country away?  Where is Monaco and how does an entire country exist mainly by providing a gambling venue for James Bond?

Now, however, the masses appear to follow a different breed of celeb.  I offer as Exhibit A the picture at the top of this post.  These people I understand to be known as the Kardashians, a seemingly solid Armenian surname.  I also understand that millions of people follow their nearly every move.  I have yet to understand the nature of their contribution to human progress, or the arts, or philanthropy, or the sciences.  I don't get out to the movies much, but have I missed some cinematic magic in which one or more of them appear?  Someone may say: "But the mom married Bruce Jenner."  Okay...THAT provides some basis for much further discussion and fawning!

Here is what the Kardashians have contributed, as far as I can research it:  They have partially averted America's thirst for celeb news away from Paris Hilton. And for that, I'm here to offer my teensiest bit of gratitude.

I would go on, but it would inevitably lead to a discussion of the whole "Snooki" thing, and I'd rather just not go there.

Two iconic area buildings are being reduced to piles of rock and memories of better days.  Yesterday, hundreds gathered around the boat basin up in Huron, Ohio, to watch some Idaho-based demolitions experts detonate enough strategically placed explosives to force the seven-story Con Agra building to implode and fall to earth.  The City made a festive day of it, with fireworks beforehand, t-shirts, reserved seating for ticketholders, and lots of tailgating and partying.  The building site, which is prime waterfront real estate, will be developed into some mix of private business and public river access. 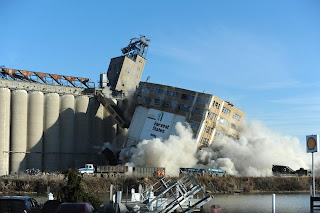 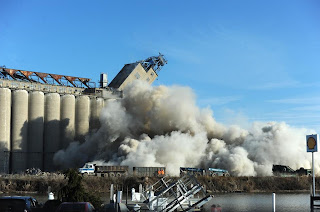 A different mood prevailed at the site of the Seneca County Courthouse in Tiffin, Ohio, this morning.  Various people and organizations had tried to piece together enough funding to save and preserve the courthouse, but their efforts fell short, and the County Commissioners voted (2-1) to demolish the building and, when times are better, build anew.  Offices had already relocated and the building has sat empty for some time.

I drove by the courthouse this morning after a couple meetings in Tiffin, and snapped what may be one of the last pictures of an intact courthouse (with protestors and their signs in view).  Later this afternoon, a crane with a large wrecking ball began pounding the southwest corner of the courthouse.  A picture from the Toledo Blade attests to its initial damage. 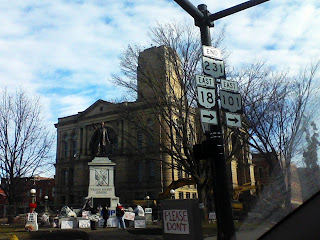 The Seneca County Courthouse, still intact, and its supporters, as I drove by this morning. 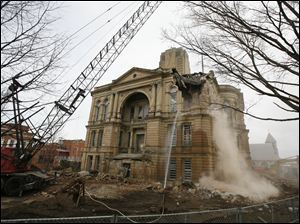 Later this afternoon, as the wrecking ball went into action..

I have been around both buildings over the years, and had meetings in the courthouse many years ago.  I suppose the failure to be able to spend extra funds to renovate and reuse the courthouse is a sign of these austere times, and it probably makes economic sense to do away with a white elephant such as this, but it still feels like an important former source of pride is now gone forever, and Seneca County has lost an important part of its identity.

It is always a pleasure to take to the Turnpike and point the car back home.  It is not just a change in scenery to head home - it is a trip back in time.  I can pick up discussions with my sister, father, friends, wherever they were left off last time.  Evidently I can still get whupped in a game of Go with my dad.  It is also good for this country boy to get back to his suburban roots.  I have always pretty much seen the good in urban and rural environments - I like them both.  I like the silence and solitude here in northern Ohio, but I also get a charge from that urban pace of life, all the people moving around presumably going somewhere important, and all the things to do and see and eat and hear.

This trip allowed a mere three full days in the Baltimore region.  Just opportunity enough to see the family, and maybe one friend who goes way back to a time when our ages were one digit.  And we had time for a frenetic trip to the mall to pick up some necessities (and to determine that, with the demise of many book and music stores, even one of the nicest malls in the country really does not really hold much appeal to me).

We were able to get out into the city for a day, to eat the required "best crab cakes in Baltimore", to eat the required diner dinner (and bring over half of it back home in a box), and to have some discussion with Dad, and silliness with Sister.  It's all cathartic; all good.

We spent a few hours on the last day walking around Ellicott City, which has been visited by this blog in the past.  Initially settled early in our country's history, home of the terminus of the first rail line in the country, now full of cool little shops, antique malls, and restaurants. it has much going for it.  Its appearance is worlds away from that in nearby Baltimore.  The hillsides formed by the Patapsco River and its tributaries add a lot of character to the place.

One of the best experiences of the week occurred by chance when son William and I walked up a hillside road, mainly to avoid the inevitable shopping expedition fomented by others, but also out of curiosity.  And man, was my curiosity satisfied!  As we walked by what appeared to be an abandoned church, a woman walked up and asked if we were in town for the day.

I responded, "Well, a couple hours, anyway"
"Would you like a brief history of the town?  I am the county historian."
Then, "Would you two like a personal tour of the county museum?" (the "abandoned" church")
"Absolutely!"
The tour ensued, and included a chance to play the still-installed church organ and a small, portable, bellows-operated keyboard sitting nearby.  The historian/curator was as enthusiastic about her work as we were about the contents of the place.  It was a fun hour or so, and we were not missed by the shoppers.

My current wish for 2012 (aside from world peace, good health, and a bull market) is for more little chance events like that to pop up and make things interesting. 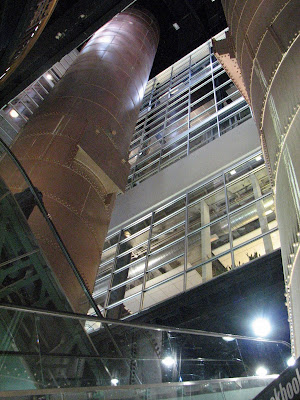 Looking up in the Inner Harbor Barnes and Noble.  An adaptive reuse of a former power plant.  Cool 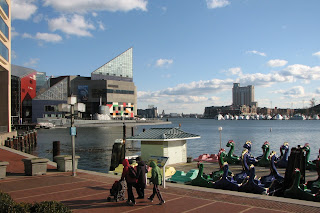 The National Aquarium back there to the left. 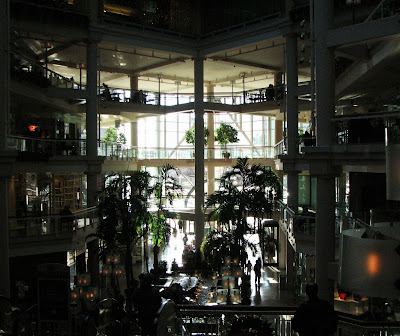 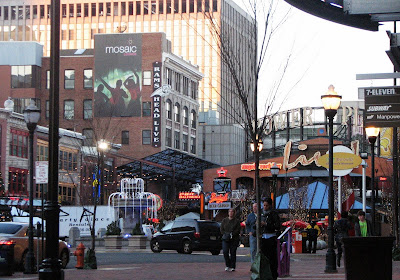 Busy space in the city. 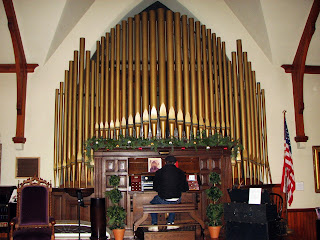 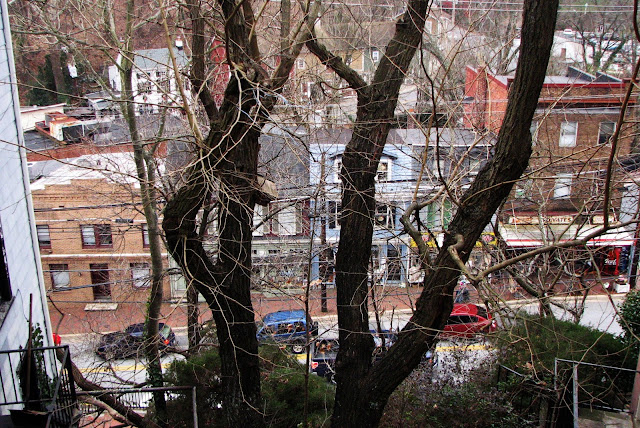 Looking down on Ellicott City from a street well above the flood line. 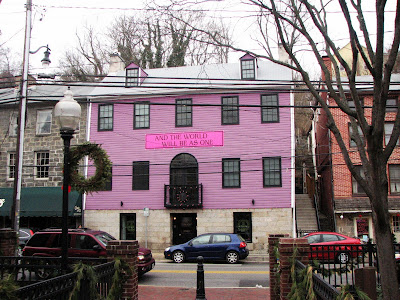 A very small hotel called the "Obladi".  It has four rooms - can you guess who they are named for? 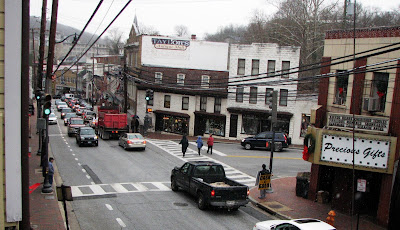 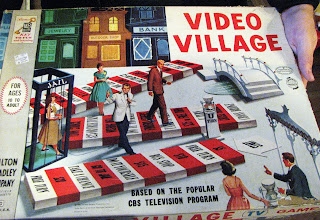 This is just a bit of nostalgia for me.  This game was spotted in an antique mall.
We had this game when I was a kid.  Does this make me an antique? 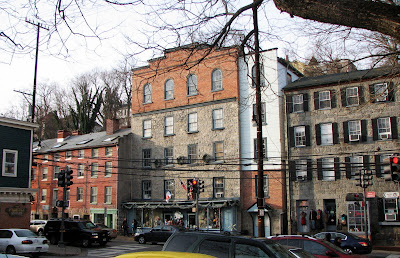 Street scene in Ellicott City.  The museum curator said the town was presumably supposed to remind the visitor of a Welsh town, but she frankly does not see it herself. 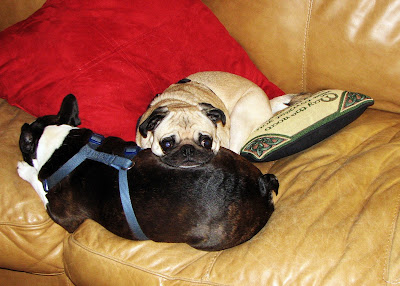 Two family members at my sister's.  Bella (the pug, facing the camera)
and Athena (the Boston lookin' the other way.)