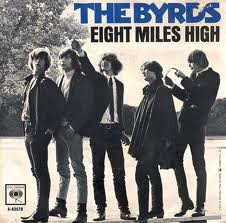 It was 1965 and things were still pretty subdued in the popular music scene. Along came this crazy Rickenbacker 12-string from outer space, spazz-jamming to the unmistakable harmonies of the Byrds. Those vocals just seemed to glide out there over those staccato stabs, melody-over-harmony, vaguely referencing the band's good and bad experiences playing England.

Commercial airliners do not reach an altitude of eight miles, but the Byrds achieved that lofty height. And yeah, the alleged (ok; they eventually admitted it) drug reference yielded a ban from the AM radio world, back in those innocent days. I admit I was a naive kid back then, or maybe more accurately, blissfully oblivious. I liked the song for what it was.

What it was - was unconventional. It was longish by AM "hit" standards. Its purported influences have ranged from Coltrane to Shankar. It reached #14 in the USA and Britain. It was also Gene Clark's swan song with the Byrds, and the band would never chart top twenty again.

I kept following the Byrds as they morphed through their spaceman, cowboy, and simultaneous spaceman/cowboy phases, Roger McGuinn's Rickenbacker weaving a common thread through their long descent from the lofty eight-mile altitude, culminating with "Chestnut Mare", a long ditty about a horse.

1965 was the dawn of an era of experimentation, stretching the bounds of music. Later would come the likes of Sergeant Pepper, Pink Floyd echoes and animals, concept albums and rock operas. But when I heard the those high-altitude harmonies wafting out of that transistor radio back in March 1965, it felt like some musical doors were being opened.
Posted by Ben at 9:40 PM 4 comments:

falling back while hurtling forward 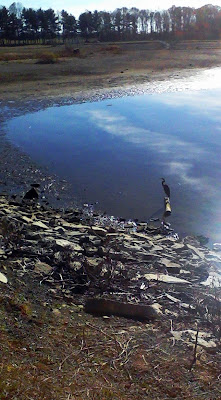 Well, quite a few days got by me between posts. 2010 has been all like that. No way to just freeze time or slow it down. Saw the movie, Inception, over the weekend, with the daughter and son in law. I was able to completely suspend my disbelief and get into the odd dreamworlds created by the ground rules of the movie. My wife was not. "How can you use a real, physical object while in a dream?", she asks. I get her question and all that, but prefer to be wowed by the things that went on in that movie.

Anyhow, without spoiling things too much for the uninitiated, there were levels of dreams, and time could elapse more and more in each succeeding one relative to the preceding level. A few seconds at level two may get you ten hours a couple levels later. This seems like a great resource to tap if it is only possible, and I would be diving down to a seventh or eighth level dream right now to get everything done that needs to be done by the end of the year if this really worked as presented.

Well, as too many people remind us, "nobody dies with an empty in box". To which I would mumble a reply that some folks sure seem to have pretty skimpy in boxes, something to which one can only aspire.

The to-do list (aside from work and home maintenance and all that reality stuff that ain't going anywhere until you actually deal with it) lately has consisted of watching the slow, younger maples release their leaves in batches, then raking or sweeping them, waiting for the next batch to drop. It was unseasonably warm (or is 60 degrees the new 40, Al?) this past week, so I spent a little contemplative deck time watching the leaves in the breeze. I swear there is some sort of telepathy going on up there; someone is getting out the message: "release another 4,000 leaves....NOW!" I am happy to say we are at the 85-90 percent released level at present.

Also got a perfect day on Veterans' Day, and I managed to walk the dog clear around the reservoir. Did not get a perfect day yesterday, but we got out to our favorite orchards, finally, and got ahold of enough Fuji apples (and a bag of mixed varieties) to keep the doctor away for the rest of the year, knock on wood.

"Rest of the year". Yeah, right, like that amounts to all that much. We are clearly, if you believe your television and your super-overloaded Sunday paper, in the throes of the peak of the holiday shopping season. The sales are on NOW, folks; no need to set that Black Friday clock for 2:30 in order to be able to reach out and TOUCH the door as the intrepid sales staff unlocks that door and backs off quickly in a primordial fight-or-flight spasm of self-preservation. No need to be part of that stampede, folks! The sales are on NOW. And anyway, many of my peeps are really into gift cards or even more pliable cold, hard cash, so this "brick and mortar store" thing doesn't really hold much sway in my shopping plans.

Oh, I do like to get out to the malls once per season, not really to shop so much as to just experience the joys of American retail commerce, observing that whole hustle and bustle thing. But once is enough, and to be honest, I do shop, but with a list and a fairly rigid plan with specific measurable goals. There is no art to my shopping, and little science. Get in, get out, check 'em off.

And lost in the shuffle, this being, as I said, part of the peak of the Christmas season (for those who, unlike me, do not procrastinate), is the fact that a perfectly good and honorable holiday is coming up just next week. I am a reasonably big fan of Thanksgiving. It seems to be as good a holiday as any for reconnecting with family and planning shared experiences (minimally, a large meal; for extra credit, the whole post-meal, tryptophan-induced, football-accompanied state of shared inception, if there are enough comfortable couches, La-Z-Boys and other overstuffed chairs to go around).

But enough rambling. Here are highlights of the past week caught on camera and cell phone: 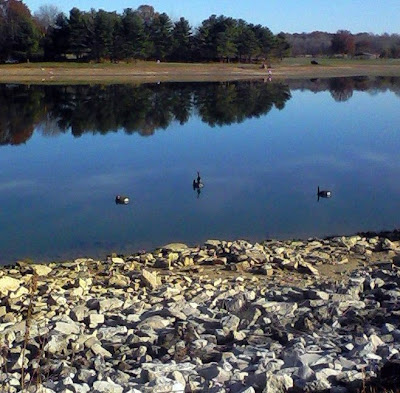 Well, you can't really see it, and it's a cell phone picture so the resolution is not spectacular, but the actual object of this picture was cracking me up. They put out these decoy geese at the reservoir to attract the real deal on the days that the hunters are allowed to thin out the flock, and anyhow, here was this bird spreading out its wings, standing right atop one of the decoys. 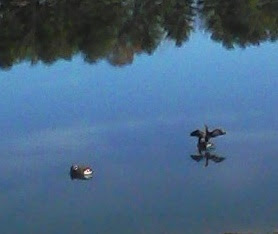 The only other thing I have to offer is the lovely sky through the trees yesterday up in Edison Woods, which consists of hundreds of acres of forest and such donated or horse-traded to the Erie County Metroparks by the local power company. The land was originally going to be used to site a nuclear power plant, which in my view would have been okay, as I am not sure that we have really trumped nuke with anything else, but I have to say the sky looked really attractive through those trees. 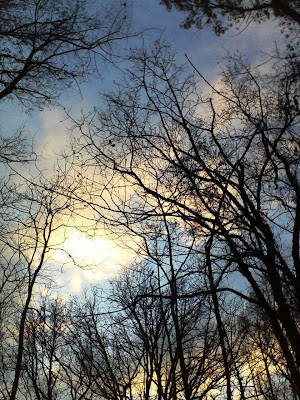 ...or so it seemed as I drove home from Salt Fork state park in southeast Ohio on Wednesday. Some examples of the changeable sky, all within minutes... 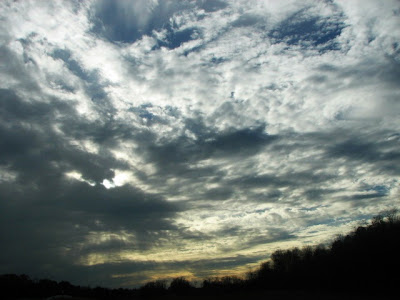 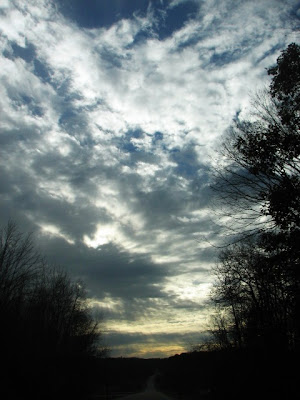 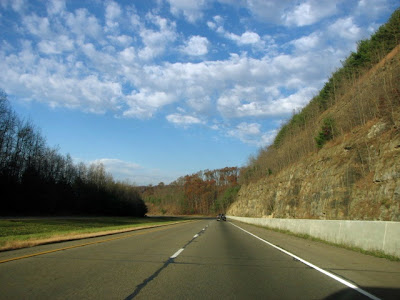 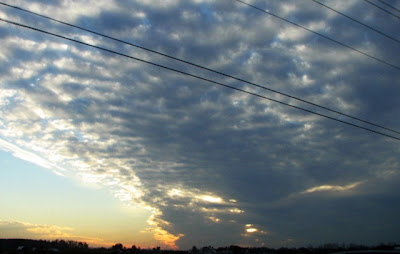 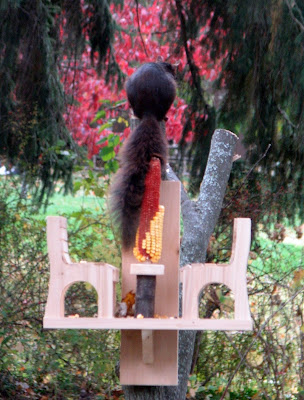 Whoa. When I started this whole "blog" thing, the goal was to check in and post with some regularity. I see where some time has elapsed since the last post. A lot of leaves have fallen since that walk down the path. A lot of leaves remain yet to fall. 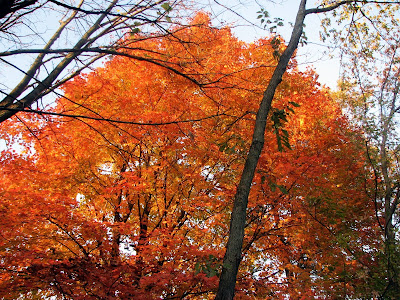 Still quite a bit of color out there, but it is going fast. I am at the point in our yard where I can rake a little now and a little later, or slack off now and deal with a whole bunch later. I have chipped away at 'em, but the bulk remain on the ground or up in the trees, mocking me. 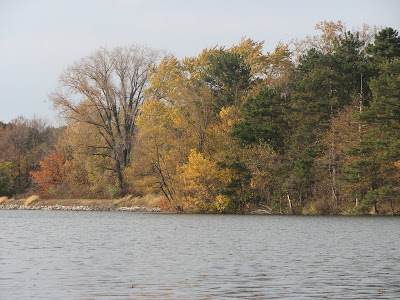 When our daughter visited a couple weeks ago, we took a three-dog trip out to the reservoir to see what was going on out there. It was one of those pleasant, decently warm days that I am beginning to miss. 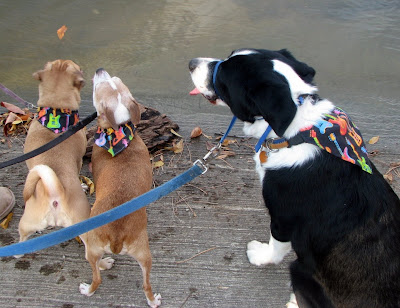 SOMEBODY thought it would be cute for the doggies to have matching bandanas (festooned with electric guitars - I am not sure of the connection, but they're colorful). So there we are... 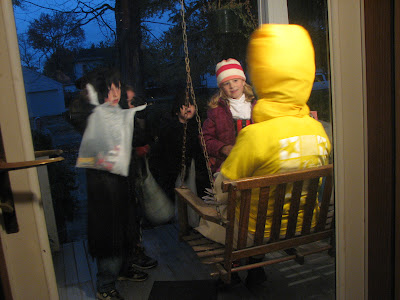 Halloween came and went. My wife became Tweety Bird (as someone said on Facebook, "Trick or Tweet"...) Tweety brought interesting reactions - the toddlers were a bit apprehensive, the older kids reciting "I tawt I taw a putty tat..." The adults in tow gave knowing glances.

And I have to mention here that of the 170 or so kids that graced our porch that evening, almost all of them were quite polite - most saying "thank you" without a prompt from Mom or Dad down in the shadows. And what the heck - kudos to the moms and dads who were along, trying to instill that politeness in their kiddies.

I always look for trends in the costumes - what (or who) is in, what's popular. I have to say I did not see any trend this year - no hero leapt out and stole the show. There was broad diversity. I think if there was any trend, it was toward the kids (and parents) doing the home-made thing, rather than buying costumes off the shelf. I would attribute that to the still stinky economy around here. 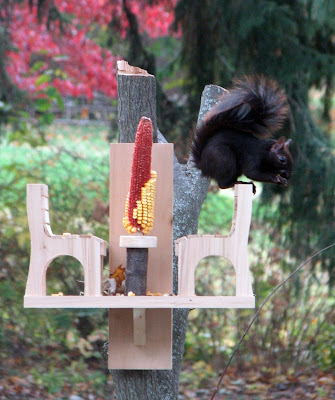 Finally, a friend gave me this two-seater squirrel feeder for my birthday a while back, and I finally got around to screwing it ("Hillbilly style", my daughter admonished) into the highest reach of our dead redbud tree that I cannot just cut all the way to the ground yet because birds around here love to use it as their staging area as they prepare to attack the birdbaths or various feeding stations. Anyhow, I love how squirrels are now going to do anything but actually sit in the chairs, human style. This guy found the chair back to be a more than adequate perch. 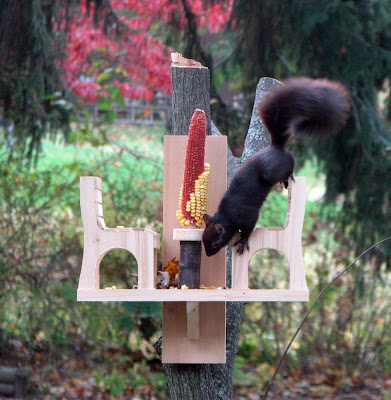