I have had more opportunity to shoot a quick pic with the cell phone lately than with the Canon - that darn camera has just not been at arm's reach when a picture presented itself. So, at the expense of megapixels and resulting sharpness and so forth, here are a few recent shots. 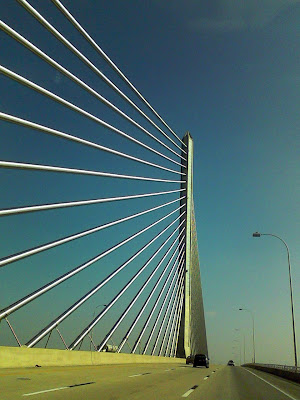 My favorite of the lot. Crossing the mighty Maumee River on I-280 in Toledo, Ohio. A rare cloudless day. First time I had been on that bridge, and it has been up for a few years now. 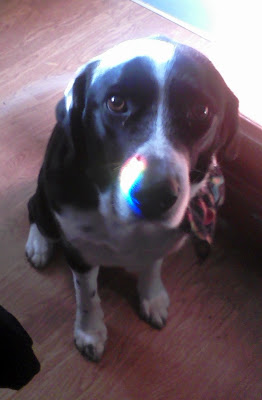 Ollie was sitting in the kitchen and the sun was glinting off a crystal in the window, sending a spectrum onto his snout. The cell phone caught the blue, anyhow. 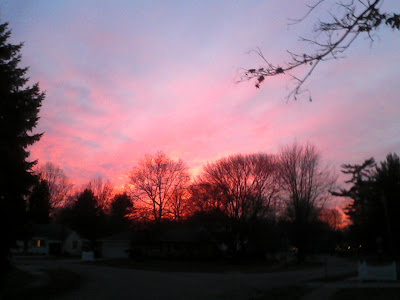 A really excellent sunset captured while walking around the block with Ollie. 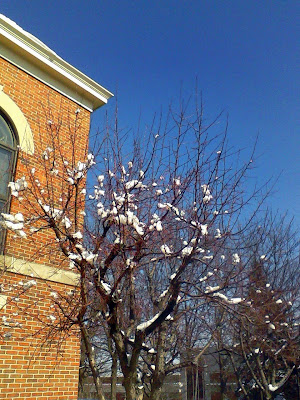 I was coming out of the library in Fremont, Ohio, a couple weeks ago, and saw these "blossoms" of snow on a tree. Tried hard to pretend it was cherry blossom time. The temperature indicated otherwise. 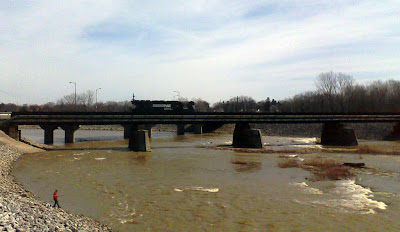 Out for a lunchtime walk. A lone Norfolk Southern locomotive crossing the Sandusky River. A sure sign of spring: the fishermen and women are starting to line the banks of the Sandusky, fishing for white bass. Or is it perch first? I can never remember which is which. 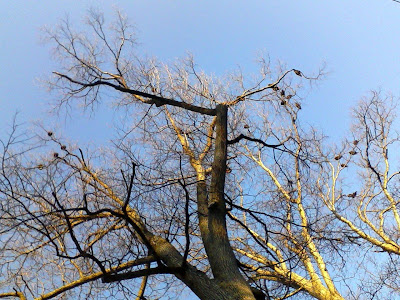 And finally: They're baaaack! A bunch o'buzzards hangin' out this evening on a tree about a block from home. We get 'em every year. They stick around for a month or so, flying off each morning to do whatever it is that they do (I would prefer not to know), returning to roost each night in a neighbor's tall, thick pine trees. But before bed, several of them like to gather up here to enjoy what little warmth they can gather from the setting sun.
Posted by Ben at 10:44 PM 4 comments:

I know this is sort of a cop out since I have not posted in ages, and here I am just pasting in someone else's words, but I liked this. And the sad part is, I guess I am one of the geezers who now remembers most of what the guy is talking about. So here goes....

It’s All About the Green Thing
By Jim Knowles

In the line at the store, the cashier told the older woman that plastic bags weren’t good for the environment. The woman apologized to her and explained, “We didn’t have the green thing back in my day.”

That’s right, they didn’t have the green thing in her day. Back then, they returned their milk bottles, Coke bottles and beer bottles to the store. The store sent them back to the plant to be washed and sterilized and refilled, using the same bottles over and over. So they really were recycled. But they didn’t have the green thing back in her day.

Back then, they washed the baby’s diapers because they didn’t have the throw-away kind. They dried clothes on a line, not in an energy gobbling machine burning up 220 volts – wind and solar power really did dry the clothes. Kids got hand-me-down clothes from their brothers or sisters, not always brand-new clothing. But that old lady is right, they didn’t have the green thing back in her day.

Back then, they had one TV, or radio, in the house – not a TV in every room. And the TV had a small screen the size of a pizza dish, not a screen the size of the state of Montana . In the kitchen, they blended and stirred by hand because they didn’t have electric machines to do everything for you. When they packaged a fragile item to send in the mail, they used wadded up newspaper to cushion it, not styrofoam or plastic bubble wrap.

Back then, they didn’t fire up an engine and burn gasoline just to cut the lawn. They used a push mower that ran on human power. They exercised by working so they didn’t need to go to a health club to run on treadmills that operate on electricity. But she’s right, they didn’t have the green thing back then.

They drank from a fountain when they were thirsty, instead of using a cup or a plastic bottle every time they had a drink of water. They refilled pens with ink, instead of buying a new pen, and they replaced the razor blades in a razor instead of throwing away the whole razor just because the blade got dull. But they didn’t have the green thing back then.

Back then, people took the streetcar and kids rode their bikes to school or rode the school bus, instead of turning their moms into a 24-hour taxi service. They had one electrical outlet in a room, not an entire bank of sockets to power a dozen appliances. And they didn’t need a computerized gadget to receive a signal beamed from satellites 2,000 miles out in space in order to find the nearest pizza joint.

But that old lady is right. They didn’t have the green thing back in her day.
Posted by Ben at 10:56 PM 3 comments:

How Do You Respond?

At about 6:00 a.m. Monday morning, just south of town, a 51 year old mother and wife, on her way to work, headed around a curve and down a familiar hill, right into a newly-formed body of deep and swift-moving water. Eight inches of melted snow had combined with an all-night driving rain to swell and flood the creeks and rivers of northern Ohio. Her Volkswagen convertible was buoyant enough to be carried 300 yards down the now-raging water, but within a very few minutes it sank in more than twelve feet of water.

The driver made a 911 call, and the dispatcher, by all accounts, handed the call well, sending rescue personnel on their way immediately. Eventually, three fire departments responded, as well as other emergency personnel and the state department of natural resources.

I understand that the sirens of the approaching vehicles could be heard near the end of the 911 call. Search procedures were begun, until the water craft rescue effort had to be called off because of the danger imposed by the unusually swift currents. Sadly, although personnel continued the search on land and, when allowed, by water, even searching under flood lights overnight, the car could not be located and hoisted out of the water until first light the next morning, when the receding water revealed the location of the car.

I have heard that rescue personnel have not taken this event easily, and I am sure there is a lot of second-guessing and "what-if's" going around. It appears, though, that the entire event was handled as well as possible, and that decisions (such as whether the driver should stay in the car or attempt to swim for shore) were made wisely, based on all known facts at each moment.

What I found extraordinary is how the community responded to Monday's tragedy. Calling hours were held at a local funeral home on Thursday night, and those in line waited as long as three hours to pay their condolences. On-line condolences poured in, and the next morning's funeral service was moved to our church sanctuary to accommodate the large number of attendees. Clearly, a large portion of those who came to the visitation did not know the woman or her family. It just felt right, to them, to go.

This was one of those events that touched nearly everyone in the community. The woman was a well-liked nurse at our region's best-known cancer center. I do not recall ever meeting the unfortunate woman, but her mother lives on our street. In smaller communities, virtually everyone seems to be, at most, two or three degrees of separation from everyone else so, like the REM song says, everybody hurts. I believe it is safe to say that it was a tough week for everyone in town.

I just realized that I have no real conclusion or ending for this post. I guess it is just an observation about how people can be touched - painfully, sometimes - by the things we have in common, and by the value and honor we can ascribe to someone's life, whether we know them or not.
Posted by Ben at 11:14 AM 5 comments:

I was heading across town tonight when the Sirius satellite radio station I was listening to started plugging a temporary "Simon and Garfunkel Channel" over on channel 38. This brought back a wealth of memories, and I immediately tuned it in.

The first LP I ever bought was Simon and Garfunkel's "The Sound of Silence". Got it at the little Hutzlers Westview record department down on the basement level, by the escalator. It probably set me back about $2.50. I remarked to my friend at the time "At these prices, I probably won't be buying many more of these." HA! Hundreds of LPs, hundreds of CDs, and now hundreds of MP3 downloads later, here I am.

Anyhow, I have a pretty good memory from every S&G single that was released, so I am picking a couple of their "mid period" tunes as my favorites here. In both cases, I bought the 45 single, then got them again in the "album" format.

"At the Zoo" was released in 1967 and reached number 16 on the Billboard Hot 100. It was pretty typical Paul Simon lyrics for the time; full of metaphorical animal imagery. Sort of an "Animal Farm" set to music and full of political allegory that shot right over my head. I always thought the tune was pretty catchy, regardless of the cleverness of Mr. Simon's wordplay, starting jazzily around a major seventh, and building toward the last verse where the animals are described, one by one.

I was babysitting my sister the night after I bought the single, and I recall playing the song continuously, maybe twelve times. 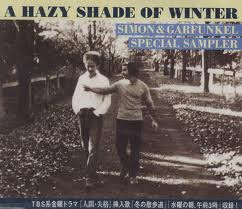 Then there is "A Hazy Shade of Winter", with that common, catchy, declining chord progression, and a bit of the ol' Simon angst as he wonders what's become of himself as time passes on. Catchy tune, making it to number 13 on the charts in 1966, and, much later, covered more edgily by the Bangles, who took it right up to number two. And again, there was Paul singing about how those leaves that were green turned to brown, time marches inexorably on, etc.

These two songs are memorable to me, but they are probably not even my favorite S&G tune. That would most lilely be "The Boxer", one of their last efforts as a working duo. But they are the two that came to my mind first as I was flipping over to the S&G channel just in time to catch, of all things, "Hey School Girl", a very early effort that was a regional hit in New York City, when those two teenagers called themselves "Tom and Jerry", and their extraordinary careers (Paul Simon's continues with a new release sometime soon) were just taking off.
Posted by Ben at 9:34 PM 5 comments: